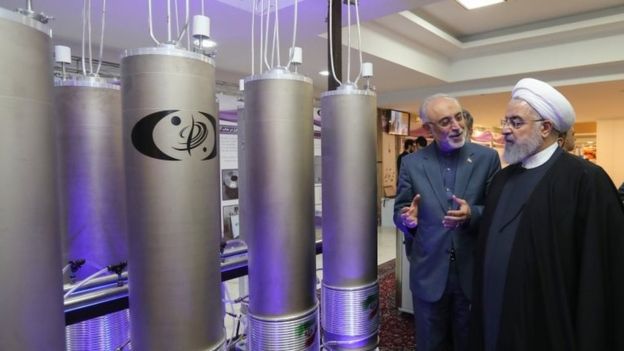 BBC- It has taken just a little over a year since the Trump administration abandoned the international nuclear deal with Iran, known as the JCPOA, for Tehran itself to challenge the agreement.

Its decision to intentionally breach the 300kg ceiling for the stock of low-enriched uranium that it can hold is but the first step of several that it is threatening.

However, Tehran insists it is not seeking to overturn the nuclear deal itself. It just wants to be treated fairly under its terms.

Iran’s case is that it has, all along, abided by the terms of the agreement. And Iran’s “good behaviour” has been independently verified by the UN’s nuclear watchdog, the International Atomic Energy Agency (IAEA).

But now Iran is saying enough is enough. It has stuck to its side of the bargain but the Americans have not only walked away from the deal, they have re-imposed sanctions and are trying to make it as difficult as possible for anyone to trade with Tehran.

This policy of “maximum pressure” is acknowledged by the Trump administration. Its goal, its spokesmen insist, is to force Iran to the table to negotiate what in US terms would be a “better” deal.

But Mr Trump’s critics argue that what his administration wants is more capitulation rather than negotiation. There is a strong whiff of regime change about some of Mr Trump’s key advisers.

The stakes are huge

Iran – if you accept that it was behind recent attacks in the Gulf as the Americans insist – has already sought to push back against US pressure. It has many ways of doing so.

And the fear is that the potential breakdown of the nuclear deal will not only encourage Iran to resume worrying nuclear activities, but it may also risk some kind of conflict in the Gulf, intentional or otherwise.

So the stakes surrounding the nuclear deal are huge. And this is going to condition many countries’ responses to what is happening. There are already differences between Washington and its key European allies – Britain, France and Germany – who remain strong supporters of the nuclear deal and want to see it continue.

Certainly they worry about many of Iran’s regional activities and they share the Trump administration’s concerns about Iran’s active missile programmes.

But they believe that the JCPOA, whatever faults it may have had, contained one essential benefit.

It took the nuclear issue out of the game at least for the immediate future. It “kicked the can down the road”. It did not resolve the disputes over Iran’s past activities or place permanent restrictions on what it could do in this field. But it averted a crisis.

Remember, before the deal was agreed in 2015, there were real fears of a possible US or Israeli attack on Iran’s nuclear infrastructure.

So what happens now?

Iran is making a point. It says that breaching the low-enriched uranium threshold is not in contravention of the JCPOA deal.

Indeed its text, at Iran’s insistence, does contain wording to the effect that if others breach the deal’s terms then Iran will feel able to do the same. That of course may not be how the other signatories see things. They may argue you are either in the agreement or – like the United States – you choose to leave it.

Iran’s pressure tactic is intended to push the Europeans in particular to do more to relieve the US economic pressure that is building up. The EU has developed a special payments system – dubbed in Euro-speak INSTEX – to try to help facilitate trade in humanitarian supplies, which in any case are not covered by the sanctions. Deals here have been made more difficult because of many banks’ reluctance to risk US action.

But INSTEX will not help with the key sectors of Iran’s economy that are suffering the greatest pain, like the oil industry. Most independent experts say that INSTEX has been slow to get going and is unlikely to make a significant difference. It is largely about the Europeans sending diplomatic signals to Tehran.

But this may no longer be enough. At the end of the day it is, after all, individual companies that must decide to trade with Iran, not governments And if they have business in the US they are going to be wary of trading with Tehran.

Russia and China are also deeply uneasy about the US position and would prefer the nuclear deal to remain in place. So the US does not have many friends here beyond Saudi Arabia and Israel, which have their own issues with Tehran.

The next high stakes moment may come in just under a week when Iran is threatening to take further actions to breach the terms of the agreement. It has suggested that one of these might be to increase the level of enrichment from the current 3.67% to around 20%.

This will be a much bigger drama. Uranium enrichment is all about stripping away atoms of one type of uranium to boost the concentration of another type, or isotope, which can power a nuclear chain reaction.

If you take this enrichment to a 20% level you are in fact about 90% of the way to having material suitable for a bomb. There are many other things Iran could do to up the stakes but taking enrichment levels to 20% would send alarm bells around the world and would make it very difficult for the Europeans to keep supporting the nuclear deal.

The JCPOA has long been described as being on life-support. So a serious shock to the system could sweep it away with uncertain consequences. That spark could come from the Iranians effectively overturning it themselves or it could come from the Middle East, where Iran or its proxy forces and the US military operate, sometimes in close proximity.

The Syrian front too is a factor. Israel is engaged there in an air campaign against the Iranian military build-up in the country.

There have been some unusually intense Israeli air attacks recently near Homs and Damascus. Anything that goes wrong, any increase in tension could feed back into the nuclear debate and vice-versa.

Iran clearly believes the pressure can be relieved in some way. But it may be mistaken. President Trump is doing everything he can to ensure the JCPOA’s demise.

The Iran nuclear deal is facing its most fundamental challenge yet and what Iran does over the next week or so could well seal its fate.