(CNN)A flotilla of motorboats, canoes, dinghies and jet-skis helmed by farmers raced to move dozens of trapped cows from frigid waters as floods hit the Canadian province of British Columbia.

After a month’s worth of rain in two days, the downpours triggered widespread flooding. Mudslides hit cities and towns across the province.
Among the worst-affected areas was Abbotsford, one of the largest cities in the province by land size, with approximately half of it farms. 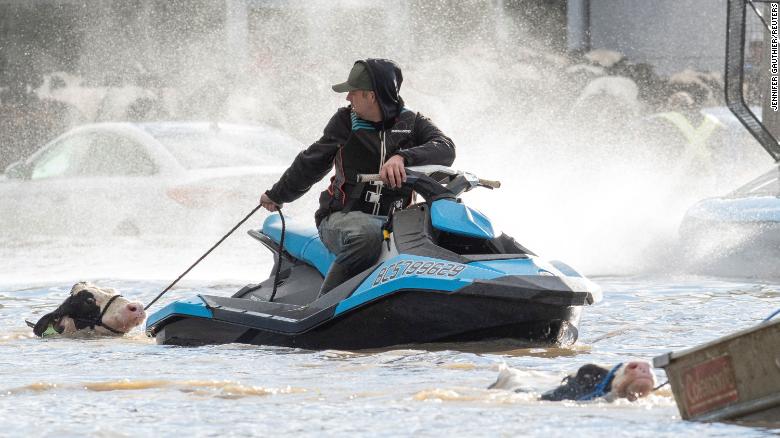 Cows that were stranded in a flooded barn are rescued by people in boats and a sea doo after rainstorms lashed the western Canadian province of British Columbia, triggering landslides and floods, and shutting highways, in Abbotsford, British Columbia, Canada November 16, 2021.
Farmers and residents scrambled to save cattle as the water quickly rose above the animals’ heads, even deploying a hovercraft. They risked their own lives to save the animals with the town under an evacuation order over fears that a water pumping station could fail and flood the area.
Dozens of people used halters and small motorboats to coax frightened cattle to swim to safety and then loaded them onto larger trailers.
“This is a disaster,” said Abbotsford’s Mayor Henry Braun, as he watched the desperate effort to save the cows. 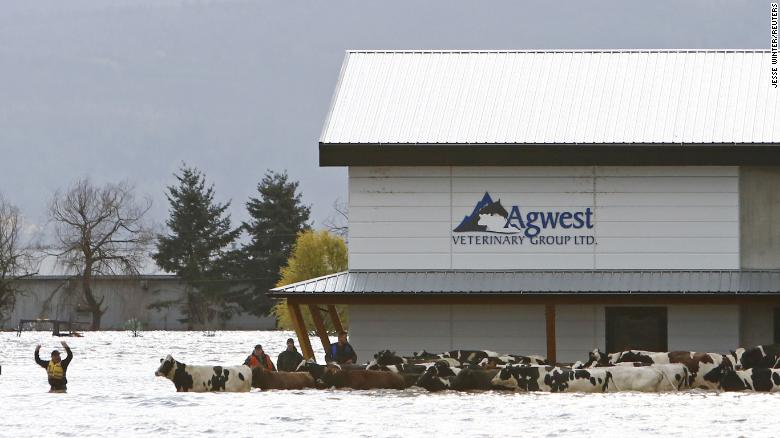 Stranded cattle are seen during a community rescue operation after rainstorms caused flooding and landslides, in Abbotsford, British Columbia, Canada November 16, 2021.
“When I see calves that are underwater and they throw them in the boats to save them, on the one hand it breaks my heart,” he said. “On the other hand, I’m just so impressed with our farming community coming together to help each other.”
Many of the farms are in the low-lying Sumas Prairie, created by the draining of a lake nearly a century ago, and which was heavily flooded when the Sumas River breached its banks in the night.
#
The floods trapped hundreds of motorists and cut off access to Canada’s biggest port and all of Metro Vancouver’s highway links to the rest of the country.
- Advertisement -