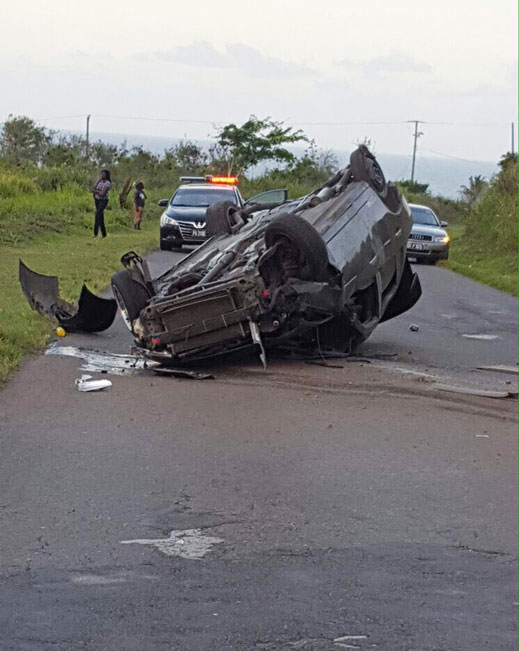 A high speed chase along the island’s main road in St. Kitts early Saturday evening (Jun. 4) ended in the overturning of a car and the young driver being slapped with a number of traffic violation charges as well as one for possession of illegal ammunition.

The driver’s name was given as Liantonio Williams of Conaree Village, but according to the police he is originally from Sandy Point.

The Observer learned that the high speed car chase started in Borryeaux at about 6:00 p.m. and ended shortly after in Lower Cayon.

According to Superintendent Cromwell Henry, in keeping with the Force’s increased visibility within communities as part of its strategy in the fight against crime, officers from the Tabernacle Police Station had established a checkpoint at the roundabout in Borryeaux.

“While there, a black car approached from Bellevue direction and the officers observed that the driver was behaving in a suspicious manner as he drove through the checkpoint. The officers decided to follow him, but as they got closer he increased his speed thus widening the gap between himself and them.”

That action, Henry explained, prompted the officers to initiate the siren in the squad car in an effort to make the driver pull over. But instead of doing so he further increased his speed and the officers were in hot pursuit.

“The officers continued to pursue the vehicle, and as it was heading in the direction of Basseterre they alerted their counterparts at the Cayon Police Station. However, they too were unable to stop the car. And due to the rate of speed that the man was driving, the officers exercised caution in their pursuit because of concern for the public’s safety,” Henry said.

The Superintendent stated that the officers maintained a safe distance during the pursuit, but as the driver approached the bend by Holland Ghaut, he lost control and the vehicle ran off the road on the mountain side, went up on the embankment, overturned and landed on its roof on the island’s main road.

“The driver was able to get out of the vehicle and he ran through the bushes towards the mountain and escaped from the officers,” Henry explained. “The officers conducted a search in the area but they did not find the driver.”

He indicated that investigations led the officers to a house in Conaree where they found Williams and took him into custody. The house was searched and the officers discovered a live shotgun cartridge and a number of other items which were also taken into custody.

This media house learned that Williams had sustained an injury to one of his feet and the police had taken him to the JNF General Hospital for treatment, after which he was placed in a holding cell.

Superintendent Henry disclosed that investigations revealed that the vehicle did not belong to Williams.

“We learned that the owner is off island. It is not known how the vehicle came to be in Williams’ possession, so we are awaiting the return of the owner to proceed with further investigations.”