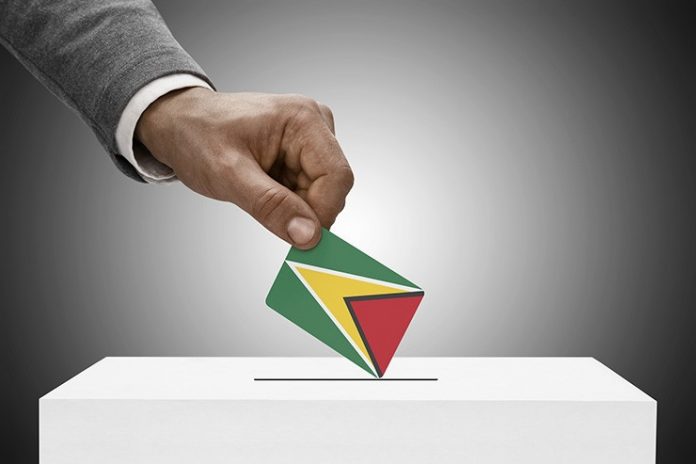 THE Caribbean Court of Justice (CCJ), on Tuesday, ordered the Guyana Elections Commission (GECOM) to halt the electoral process pending its decision on whether or not the Court of Appeal had jurisdiction to interpret Article 177 (2) (b) of the Constitution to mean “more valid votes are cast.”

The March 2 poll has yet to be decided after a recount revealed the opposition coalition the winner…But this has been challenged by GECOM which claims 25 percent of the votes cast were not valid, giving the ruling coalition the win.

In the appeal filed by People’s Progressive Party/Civic (PPP/C) General Secretary, Bharrat Jagdeo and its Presidential Candidate, Irfaan Ali, the CCJ ordered that: “The Guyana Elections Commission and its officers and agents take no step to prejudice the fair hearing of this Application including but not limited to issuing a declaration of the results of the elections held on 2nd March 2020, until this Court issues final orders following the hearing and determination of the questions raised before this Honourable Court in the said Application.”

The Order was handed down by a panel of judges led by President of the CCJ, Justice Adrian Saunders in the case – Mohammed Irfaan Ali and Bharrat Jagdeo v Eslyn David, the Chief Elections Officer and others.

Earlier on Tuesday, Ali and Jagdeo, through their attorneys Trinidad Senior Counsel Douglas Mendes and Attorney-at-Law Anil Nandlall – had applied for special leave to appeal the Court of Appeal’s decision in the CCJ with the intention of having it struck out. The Court of Appeal’s decision was handed down on Monday, however, it agreed to stay its order for a period of three days based on a request by Attorney-at-Law Kashir Khan, who was representing Change Guyana and Citizenship Initiative in the original case brought by David.

While the Attorney General and Minister of Legal Affairs, Basil Williams had contended the decision of the Court of Appeal could not have been appealed at the level of the CCJ in light of the fact that the Caribbean Court of Justice Act, Chapter 3:07 limits the appellate jurisdiction of the Court in Section 4 (3), the CCJ relied on Section 8 of the Caribbean Court of Justice Act, Cap 3:07 of the Laws of Guyana to issue its orders.

The country’s apex court took into account its overriding objective, including its inherent power to actively manage cases and make orders as may be necessary to meet the ends of justice as stated in Rule 1.3 (2) of the Caribbean Court of Justice (Appellate Jurisdiction) Rules, 2019.

In addition to freezing the electoral process, the CCJ, ordered that case management be done on Thursday. It ordered that: “A Case Management Conference be held on Thursday 25th June 2020 at 3:00 pm via video conference pursuant to Part 8.2(f) of the Caribbean Court of Justice (Appellate Jurisdiction), Rules 2019 with a view to a proposed hearing, to determine issues raised in the Application, on the 1 st day of July 2020 at 10:00 am via video conference.”

Hours after the application was filed on Tuesday, the CCJ, through its Deputy Registrar and Marshal, Gizel Thomas-Roberts had informed the parties in the case that an order would be handed down today.

“I have been instructed by the Bench to inform that the Court will no later than Wednesday 24th June, 2020 issue an Order that (a) maintains the status quo until further order; (b) orders the holding of a CMC (Case Management Conference) in this matter on Thursday 25th June, 2020 at 3:00pm with a view towards (c) a full hearing of all the matters in dispute on Wednesday 1st July, 2020 at 10:00am,” Thomas-Roberts said in a notice to parties involved. The Orders were subsequently issued.

Notably, while the Court of Appeal interpreted the Article 177 (2) (b) to mean “more valid votes are cast” and has since stayed its order, it was unable, due to its limited jurisdiction, to restrict the Chief Elections Officer, Keith Lowenfield, from submitting his Election Report. That Report was submitted to the Chairman of the Guyana Elections Commission (GECOM), Justice (Ret’d) Claudette Singh on Tuesday before the CCJ issued its order.

Meanwhile, in a letter to the Chair of GECOM and her Attorney Kim Kyte-Thomas on Tuesday, PPP/C Attorney Devindra Kissoon asked the Elections Commission to hold its hands in light of the case filed by Ali and Jagdeo in the CCJ.

“In light of the pending appeal, we respectfully write this letter to request that you undertake to take no further steps in matters relating to the Regional and General Elections, including matters relating to the report of the Chief Elections Officer dated and submitted to GECOM today, June 23, 2020, until the matter is finally resolved by the CCJ,” Kissoon said in the letter.

The Elections Commission was expected to meet on Tuesday at 11:00hrs, however, its meeting was cancelled, to allow for the circulation of the written order and decision of the Court of Appeal among its members, and in light of the appeal filed in the CCJ.