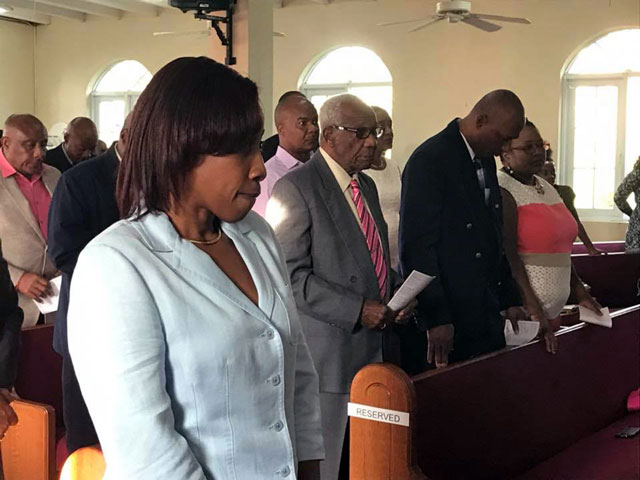 The event, held under the theme ‘Celebrating a Generation of Service and Preparing for the Next’ took place at the Church of God of Prophecy at Craddock Road. Chairman of the CCM Stedmond Tross made the welcome remarks and the party leader the Hon. Vance Amory did the reflections.

“The young people who are now thirty-five and so, all they have known initially is the CCM as a party in government providing what I consider to be good quality governance for the people of Nevis. We did that consistently.

Today the 22nd of January coincidentally or fortuitously or in terms of the Lord bringing into alignment certain things, this is what we are here doing today. Celebrating thirty years of the party and four years of the government.”

Also in attendance at the service were several federal ministers including the Prime Minister the Hon. Timothy Harris who congratulated the CCM on achieving the milestone.

“I want to say thank you to the CCM party for allowing us the services of your distinguished son in the personality of the honourable premier, a man whose character is unblemished even though many would have tried to take him. And I have heard that even those who are politically in opposition to him commend him quietly but honestly. They recall his own achievement, how he stood as a role model in sports, in education, in banking and in government. And through it all they could honestly say that Vance was not about himself. Vance was about the people of Nevis and that deserved a round of applause.”

According to Hon. Hazel Brandy-William, Junior Minister responsible for Social Development, Youth and Sport who is also the Chairperson of CCM’s 30th anniversary organizing committee, there are several other planned events that will conclude the week of celebratory activities.

“On Sunday the 22nd was a significant date. It was actually the date of the last election when CCM was brought back into office. Then this week Saturday night we will have an awards cocktail where we will be honouring all those persons over the last 30 years who would have participated in active politics, whether they were just candidates or they actually became ministers. And there are some twenty persons who will be honoured at that function which will be held at the Botanical Gardens. And then on Sunday 29th we will be a caucus of the top persons of CCM, the strategizers and this will be something in camera and is not open to the general public.”

While the service was not attended to the expectation of the CCM members, this lack of attendance was attributed to failures in miscommunication regarding factors such as the actual date of the service, the availability of the church and the premier being on island.

The Nevis Reformation Party (NRP) also held an event on Sunday 22nd. According to the leader, Hon. Joseph Parry, the clash of dates was coincidental and unplanned. The NRP’s event which was a general council meeting was geared towards directing the party as to the issues coming out of the various branches and of course those which affected the people of Nevis on a whole.