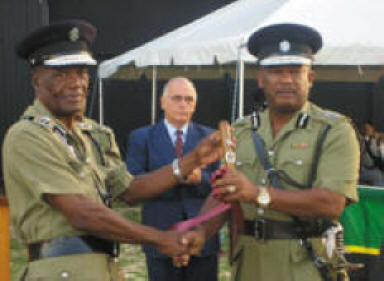 Austin Williams officially took command of the Royal St. Christopher and Nevis Police Force on Wednesday, Feb. 7, at a ceremony at Warner Park. Commissioner Williams had been appointed Acting Police Commissioner last October and on Jan. 23, Prime Minister Dr. Denzil Douglas gave him more permanency in that office when he appointed Mr. Williams as commissioner.

The installation ceremony at Warner Park was the first in the history of the police force. The Master of Ceremonies, Inspector Ivor Blake, noted that the symbolic gesture has been part of military traditions.  It signals the change of authority from one individual to another, he said.

“We need to get back to those standards,” emphasised Mr. Jeffers.

Commissioner Jeffers also urged unity and support for the new commissioner. He asked members of the force to put aside differences over the choice of commissioner, and he rationalised that appeal when he stated “not all can be commissioner.”

“The Prime Minister made a wise choice, and I support that,” added Commissioner Jeffers.  He said the choice of a citizen of the Federation to lead the police force is fitting in light of this year’s celebration of attaining independence 25 years ago.

“It has been said,” the new commissioner said, “and demonstrated by the Government that national security is priority.”  Commissioner Williams pledged his commitment to this priority as well.  To that effort, he outlined the need to “strengthen bonds and inter-communication” among agencies such as police, immigration and customs.

One sign of the future of Commissioner Williams’ stewardship came in his appeal for assistance from the public, which he deemed critical.

Since his assumption of the office of Acting Commissioner, Mr. Williams and the police have been engaged in a number of town-hall style interactive discussions with the general public.

After the ceremony, Commissioner Williams spoke of his reaction to assuming office.

“I have been acting in this post for a little over three months. It felt good,” he said. “We have a good team and we’re working well together. We’re increasing police presence it the community. I think the public is pleased.”

He looked ahead to the work before him and said he “pledged to work with our allies in the St. Kitts-Nevis Defence Force” and all other related agencies.

“We want to share information and build partnerships,” he said. “Our goal is to make law enforcement our number one priority.”

Commissioner Williams has more than 20 years of experience in law enforcement. He has filled numerous posts, including assistant commissioner, head of the Special Services Unit, head of Special Branch and on patrol. In addition, he has attended courses and seminars, including the Jamaica Staff College, the FBI National Academy and the Police College at Bramshill in England. In 2007, he coordinated security for the Cricket World Cup.

He has served as president of the Police Sports Club, the Police Welfare Association and the Police Credit Union.

Commissioner Williams has also been active in sports. He has served as the secretary of the St. Kitts Cricket Association, the manager and player on the Domino World Tournament team, the St. Kitts Masters Cricket Team and serves on the St. Kitts-Nevis Football Disciplinary Committee.

He has been married to Laura Williams for 25 years and is a father.