One of the beautiful things about the crucifixion story is that it is not exclusive.  When Jesus Christ went to the cross to be crucified, he was crucified for every single person irrespective of race, ethnicity, economic background, family back ground, criminal record, age, gender, disability, educational background, girth, health, skin tone or gait.  This inalienable human right to equality is made sacrosanct in Chapter 2:3 of the St Kitts Nevis Constitution which gets its genesis from the UN Universal Declaration on Human Rights of 1948.  We well remember the late great Rev. Martin Luther King Jr. reminding America of their declaration of Independence when he quoted the phrase which says “We hold these truths to be self evident, that all men are created equal, that they are endowed by their Creator with certain unalienable Rights…”.  It pains me then that we continue to act like some people are more or less equal than others.

Assumed and actual criminals are people too…

I am amazed at how people see assumed and actual criminals as less than people.  Some of the convicted criminals made mistakes in a split second that they have to serve time for.  The sad thing is that when they have served their time, employers are afraid to hire them and their former friends don’t want to talk to them, the police continue to harass them and nobody even wants to stop to give them a lift.  It is almost as if they have to pay twice for their crime and they have now become scums and not people that Christ died for.  As a Pastor in Newcastle, I have made it my business to have regular conversations with some of these assumed criminals because as far as I am concerned Christ died for them too and they are just as in need of him as the millionaires in upper Shaws Road.  However I have been accosted by all types of people who want to know why am I being seen associating with them.  My simple answer is “Christ died for all of us”.  You would be surprised how much rich insight and intelligence can be gleaned from a simple conversation with them.  I will forever value their camaraderie and friendship and see them as key building blocks in the Kingdom of God.  I do not see them as any less equal to the businessman who has no criminal record but who are guilty of a few white collar crimes.  Some of these supposed “gangmen” are genuinely hurt when people who they look up to pass them straight in their air-conditioned vehicles and can’t even spare them a toot of the horn.  In some cases, it the family members of these same presumed gangmen who refuse to even say “hello”.  While I know that everyone will have their reasons and there are two or three sides to every story, we must always remember that Christ died for all of us.

The Poor and Differently Able are people too

The same supercilious attitude gets worse when we interact with people who are deemed as “poor” or if they are differently able in some way shape or form.  It is this attitude why people look down on those who attend the Cecele Browne Integrated School as less than and some parents are afraid to enroll their children there too.  This is not because the school cannot help their children to learn and maximize their potential and become successful individuals in life, but because the scorn from the general public, young and old alike is too caustic.  I wonder if we forget that they were created equal just like anyone else and that Christ shed the exact same amount of blood for them as he did for us.  I am similarly shocked when I see people trying to keep down poor people simply because they are poor.  We say “dem dey from Rawlins or Bath or Cotton Ground so dem dey can top dey”.  It is almost as if we forget that these same villages produced two Premiers and an Attorney General and that the longest serving Prime Minister in the Caribbean came from the belly of poverty in the country known as St Pauls with a father that worked on a sugar plantation and a mother who died when he was eleven months. It is to our peril when we look down on poor people because those same poor people may end up being in charge of us.   We ought always to remember that Christ died for all of us.

People beneath us are people too

God in his own infinite wisdom and favour has allowed me to serve in capacities where I have to oversee a number of individuals.  I have been fortunate to serve as Pastor where I oversee a church, a CEO where I oversee a business and a Director for different profit and non-profit institutions.  It pains me then when I see people turn up their noses at others simply because they have power.  Some use it as an opportunity to settle old grudges, to frustrate others and to abuse their power among other things.  They treat their subordinates like they are less than people simply because they can do so.  Some of them even laugh and boast about it afterward.  I do not see how because I am Pastor or CEO or Director that I am any more human than the usher, sales clerk or garbage collector.  I remember someone boasting about their profession and belittling another by saying “so and so is just an orderly up the hospital”.  I was quick to remind them that when he gets sick, it is the same orderly that would have to wheel him to the operating room.  It is important that we remember that Christ died for all of us.

My word restrictions prevents me from going into a myriad of other examples but I trust the point is well made that all of us need to be reminded that all of us are equal.  It is enshrined in our supreme law which is the St Kitts Nevis constitution but it was all paid for at Calvary.  The next time we are faced with a decision on another human being; let us remember that Christ died for all of us. 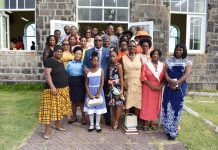