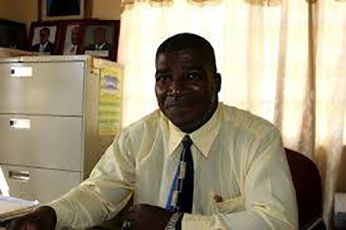 On Monday, Sept. 4, the students and staff at the Charlestown Secondary School and Sixth Form College in Nevis will be greeted by a new principal when school re-opens. Former principal Edson Elliott has been relocated in another division of Nevis’ education system.

The announcement of Elliott’s transfer came from Palsey Wilkin, chief education officer, in Nevis during an annual back-to-school ceremony held at Nevis Performing Arts Centre Aug. 28 and attended by returning teachers, new teachers and principals from the various public high schools and primary schools on the island.

According to Wilkin, Elliott had been “reassigned.”

“[There have been] a number of changes in education for the upcoming school year 2017-2018,” she said. “[The] changes [have been] at the Department of Education, as well as changes in some of our schools. …I refer specifically to the Charlestown’s secondary, [where] Mr. Edson Elliott, former principal of the Charlestown Secondary School, will be now the join the staff at the Department of Education.

The announcement seemed to come as a shock to most in attendance, as loud gasp came from the attendees.

Wilkin revealed that Elliott will be reassigned as an education officer responsible for secondary schools. Elliott has been the longest-serving principal at the Charlestown Secondary School ,serving 13 years as principal. He had been the deputy principal from 1999 until he was promoted to principal in 2004.

Elliott noted he is having mixed emotions about his reassignment, but is looking forward to the new challenge. “The feeling is kind of mixed, of course, having been here for such a long period of time you would have established some ties, and certainly  you wouldn’t just get up one morning and leave,” he said. “I will be thankful for the opportunity to serve in another capacity. I am looking forward to the new challenge.”

Elliott said that the former deputy principal at the school will now be promoted to principal.

“The new principal will be Mr. Vaughn Williams,” Elliot said, wishing the Charlestown Secondary School well. “He has been my deputy for a long while now and I think he is the most fitting person to take over, having worked closely with me over the years.”