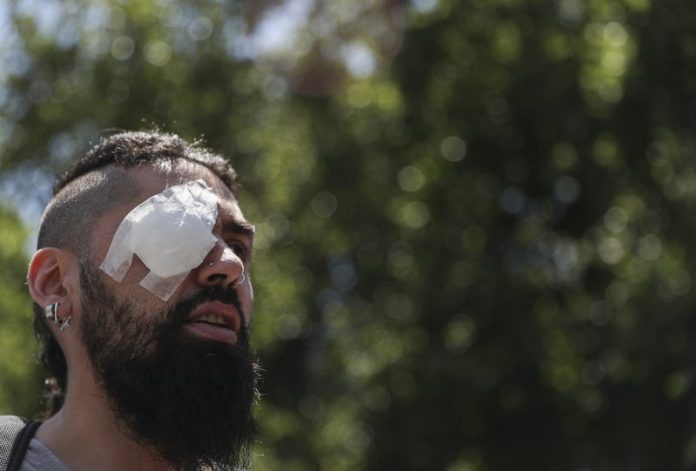 Marcelo Herrera, his eye bandaged from an injury he received during recent protests, takes part in a demonstration in support of protesters who have been injured in the eye by Chilean police, in Santiago, Chile. (AP Photo/Esteban Felix)

SANTIAGO, Chile (AP) — Protesters rallied in front of Chile’s presidential palace Thursday to support people who have lost eyes to police shotgun pellets and tear gas canisters during mass demonstrations that have wracked the country.

Some of the dozens of demonstrators had bandages on their faces and told angry tales of being hit by face-level fire that they felt was intentional. “In Chile, asking for dignity costs you an eye,” one sign proclaimed.

At least 232 people have lost vision during five weeks of protest in Chile against deep inequality and calling for better social services and pensions. Of those, doctors say at least 50 people will need prosthetic eyes.

Thursday’s demonstration came days after news emerged that a new victim, Fabiola Campillai, had lost sight in both eyes after being hit in the face by a tear gas canister while waiting at a bus stop to go to her night shift at work.

Marcelo Herrera, an environmental engineer with a white patch over his right eye, described how his eye was injured during a protest Nov. 4.

“The Carabineros were firing tear-gas bombs from about 100 meters away at a standing group and one landed on the knapsack of a friend,” Herrera told The Associated Press. “Another person was struck on the head and I went to confront the Carabineros.”

He said the others in the group turned and ran, and he was left alone facing the police. Just as he was deciding to leave before something happened, he was “hit in the eye by a pellet,” Herrera said.

“There was no one around me, nobody. It was a shot directly” at me, he said.

“It’s terrible what is happening,” he added. “Now they have stopped firing the pellets, but they keep firing tear gas bombs in the face of the people.”

But Carlos Puebla had no such luck.

“I lost my eye; they emptied my eye” by hitting it with a pellet, he said. “I’m not the same.”

Puebla said he expects to receive a prosthetic eye from a public health program created especially to deal with the health emergency created by the blinding of protesters. But he does not believe he can continue working as a construction worker.

“I saw one (of the police officers) lift his shotgun to his shoulder and point it right at my face. And then all I felt was my face swelling, bleeding, and I fell to the ground.”

“It’s brutality, they skip all the protocols,” he said of police actions.

What began Oct. 18 as a student protest over a modest increase in subway fares has turned into a much larger and broader movement with a long list of demands that largely have to do with the wide gap between the rich and ordinary Chileans.

Protesters are calling for reforms to health care, education, pensions and even the constitution, which dates from 1980 during the military dictatorship.

The early mass demonstrations were mostly peaceful, but it was common to see small bands of hooded protesters hurl rocks, raise barricades and confront police, who clamped down with violence.

According to the latest figures from the independent National Institute of Human Rights delivered to Chile’s congress Thursday, there were 2,808 injuries during demonstrations — 1,737 of them caused by firearms. It said 232 people suffered eye trauma.