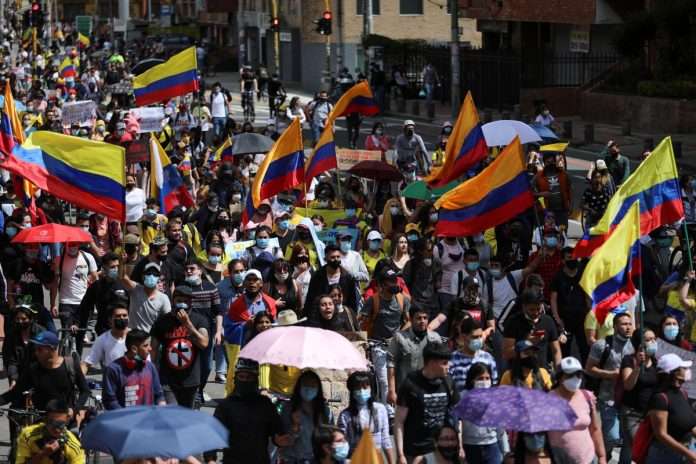 The reported death toll from nearly two weeks of anti-government protests in Colombia rose past 40 on Tuesday, a day ahead of a planned national strike, while major cities warned of a prolonged peak in COVID-19 cases due to demonstrations.

Violent protests fueled by outrage at a now-canceled tax plan began on April 28. Demonstrator demands have expanded to include a basic income, an end to police violence and the withdrawal of a long-debated health reform.

His family and the government also confirmed his death on social media Tuesday.
The 37-year-old was one of three students shot by unknown gunmen on motorcycles at a demonstration on the evening of May 5 in Pereira, central Colombia.
“Continue dancing in each cloud and make everyone there happy, like you did here,” his sister, Nicole Villa wrote in a post on Instagram.
The death caused consternation in Colombia, as Villa was a well-known figure in Pereira, and doctors at San Jorge Hospital had expressed hopes he might recover from his wounds. 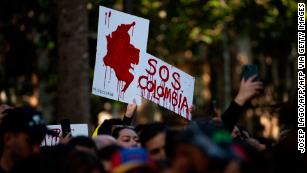 Colombia’s protests, explained
Duque commented on the protester’s death on Twitter writing: “We stand with the Villa family with deep sadness after the news of Lucas’ death. I repeat what I [said to] Mauricio, his father, that this becomes the opportunity to come together and reject violence. To the responsible [I wish] all the power of the law.”
The government is offering a reward of 100 million Colombian pesos ($27,000) in exchange for any “information to capture those responsible,” Minister of Defense Diego Molano wrote on Twitter, before expressing “all our commitment to finding those guilty for this atrocious crime.”

Smaller protests and road blockades have continued daily around the country. Unions and student groups have called for a national strike on Wednesday after a meeting with President Ivan Duque left them at odds with the government. read more

Colombia’s human rights ombudsman said it had received reports of the deaths of 41 civilians and one police officer. It is verifying if they are directly connected to the protests.

The police and its ESMAD riot squad are presumed responsible for 11 killings, the ombudsman has previously said, while it classed seven deaths as unrelated to the marches themselves.

“We call for all necessary measures to be taken to put an end to the violence that is bleeding Colombia dry,” the ombudsman’s office said on Twitter.

Duque visited the city of Cali – a focal point for protests – for a second day in a row on Tuesday and announced poor and working class students at public universities and technical schools will pay no tuition next semester.

The center-right president lacks strong backing in Congress, where his tax proposal, which would have expanded items subject to sales tax, was heavily criticized. His term ends in August next year.

Capital Bogota is confronting a “hospital collapse,” Mayor Claudia Lopez said in a press conference on Monday, and will not see infections drop this week as previously predicted.

A fall in infections will not come until the end of May, Lopez said, adding that protests make quarantine restrictions nearly unenforceable, although she extended a curfew and restriction on alcohol sales.

Medellin, whose ICUs have been at or near full-capacity for weeks, is preparing for a possible crisis, health secretary Andree Uribe told Reuters in a video.

“We know there will be an increase in cases, we’re on alert, we are carrying out actions for early identification, like testing everyone who participated in the marches,” she said.

“We’re worried about marchers who don’t comply with any of the self-protection protocols like physical distancing and the use of face masks,” she said. “And with the presence of strains like the British one, which are highly contagious, it’s indicated the figures won’t fall in the short term.”

Cali’s ICUs are about 95% occupied, according to local government figures.