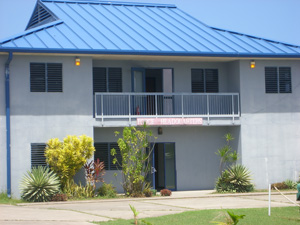 ‘Slanderous, egregious and preposterous’ are just some of the words used by Commander of the St. Kitts Nevis Defense Force Colonel Patrick Wallace in describing the allegations of abuse done to teens by soldiers at Camp Springfield.

The allegations recently surfaced in a local newspaper that soldiers at the camp were physically abusing young persons sent there for discipline. The person making the allegations claimed that not even females were spared the ill treatment as he told of a young girl being ‘slapped to the ground’.

The accuser further claimed that a young male had ‘passed out’ after he had been forced to run laps around the parade square for two hours sometime after midnight and that the same boy had been badly beaten by soldiers.

Col. Wallace said the allegations made against his men were a form of retaliation from a soldier who had been disciplined. He said that the perpetrator also had personal ulterior motives.

“We know who the chap is who is spreading these lies, and they are just that, blatant lies. I knew that he had contacted one journalist in attempt to have the story printed. That journalist related to me what was told to him and said that he had investigated the allegations and found them to be untrue. The person was obviously not satisfied so he went to another newspaper, which ran with the story. Aside from the fact that the allegations of abuse had no merit, it was stated in that newspaper that the reporter tried to contact us and failed. I wish to make it clear that I have been in office everyday and have never received any call from that reporter and I also checked with my Public Relations Officer Lieutenant Kayode Sutton to see if he had been contacted. He also said no one had called nor left any message for him regarding the matter. The guardroom receives calls made to the Defense Force and according to the soldiers working there, no one had called from that media house,” he stated.

Col. Wallace said he categorically denied the allegations that any child was beaten with a pipe and showed the Observer the 24-inch chrome, hollow piece of metal that was referred to in the story.

“I saw a soldier with the boy and asked why he was in his boxers and shoes. I was told that he had been told to run laps and was made to take off his school uniform shirt and pant so that they would not get sweaty. He ran his laps and was given lunch. If you read what is stated in that newspaper, the person making the allegations did not witness all of the accounts of alleged abuse. The so-called incidents are all second-hand accounts that he claims someone else told him. I investigated the reports made to me about the boy being beaten with a pipe only to find out that they were referring to a thin chrome strip that weighs a couple of ounces.  In reports filed by the persons the accuser said witnessed the beating, it states that a soldier saw another one raise the thin strip in a striking position over the boy but called out to him. The soldier did not actually hit him,” the Commander said. He explained that the boy was made to run laps in the evening as a form of punishment but was given breaks in between to rest.

“I will not cover up nor deny something which I have sanctioned. If I do something, I do it because I feel that it is necessary and I should be able to justify it. I would stand by the decision because it was made in good faith. I categorically deny the story as it is printed by Sun newspaper. It has been twisted and woven to create a particular effect, rather than portraying the truth,” Wallace avowed.

He explained how it was that children were brought to the camp, saying it was either by parents who felt they were at their wits end with a ‘wayward’ child, by order of the Court, or by request from the Ministry of Education. With regard to the youth in question, both the Basseterre High School and the Ministry of Education had written reports outlining the abhorrent behaviour of the teen.

“We don’t have to take these kids in because it is not a part of our mandate, however we are attempting to assist parents in preventing their kids from becoming criminals as is the case with most of the ones who display such deviant behaviour. The schools have tried, their parents have tried and the Court prefers to send them here to get straightened out rather them send them to jail to mingle with hardcore criminals. They feel that the teens would come out much worse than when they went in. They are not sent here for a vacation, they are sent to learn that that type of behaviour is not acceptable and has consequences, so that is why they run laps and do chores.

“The reports on this boy, and there are many, outline him threatening teachers and calling them the most degrading and defamatory names. According to the reports he beats and threatens other students to the point where they are afraid to go to school. He even beat one boy with a pipe. The reports state that he robs other students of their money, cellular phones and name brand items and is often the ringleader who points out who is to be robbed. He was also one of a group who attempted to tie a student to a chair and was ordering that the boy be suffocated and stabbed. We contacted his mother to have her pick him up and I spoke with both of them, after which the mother thanked me repeatedly. If her son had been beaten with a pipe and suffered other abuse, I don’t think she would have done that,” he said.

Wallace said that kids had been taken to the camp for discipline since the inception of the force and said that if such abuse had been going on, the ministries, parents and courts would have ceased to send them there. He said he could list numerous success stories of young people who as a result of their time spent at the camp, had changed their destructive ways and had become productive members of our society.

The Observer spoke to a desperate mother who had brought her son to the Defense Force camp hoping that they could somehow save her son. The woman said she felt this was her last chance to help her seventeen year-old, who was obviously heading down a dangerous path despite all the attempts made by her husband and herself to guide him in a positive direction.

“He is not respecting the rules of my house and no matter what I tell him, he is not listening. I had to go to the school because unbeknownst to me, he had been skipping classes. I have tried my best, I have gotten countless other people to talk to him and still he continues with this kind of behaviour. I am at the point where I want him out of my house,” she said in a defeated tone.

The mother said that the last straws were seeing her son in a gang video and having him tell her ‘if he hit her, she would not like it’. She admitted that the father had been so enraged that he wanted to ‘box him down’ but she had intervened to prevent him from getting into trouble.

“I had heard about parents bringing their bad children here over the years and I am hoping that they can help my child too. I have already told him if he wants to be a big man then he can leave freely. I refuse to put up with this kind of behaviour from a child living in my place,” she said.

The troubled woman said she had noticed the boy wearing a blue bandana in his pant pocket all the time but thought it was being used to wipe his face. She said she was horrified to learn that the act was a symbol of gang membership.

The teen denied being a part of any gang, and said he was guilty only of innocently posing for a picture. He did not answer to the question of why he had put his hands up to depict an obvious gang sign during his pose. He was asked what he would do if his mother refused to feed him after his disrespectful behaviour and replied ‘I would go somewhere else and get food’.

One can only hope that either the visit to the camp or some other method of intervention can reverse the young man’s attitude before, according to him, his behaviour makes him wind up in jail or in the cemetery.