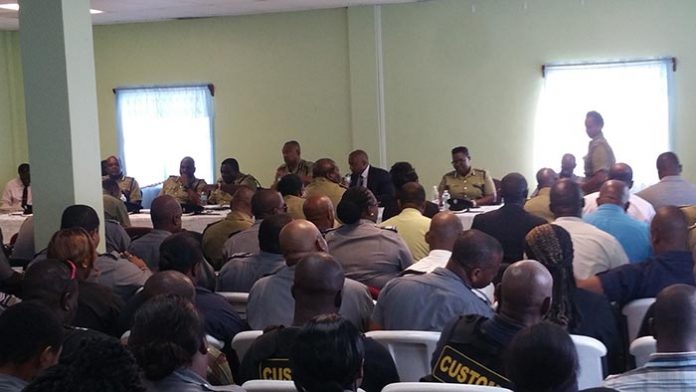 Commissioner of Police Ian Queeley has commended officers of the Royal St. Christopher and Nevis Police Force (RSCNPF) for the improvements they made in the fight against crime and lowering the murder rate in 2017 but encouraged further progresses in that area.

Queeley stated, however, he believes that in order to successfully prevent crimes the police will have to be successful in detection.

Queeley indicated one area of concern is the amount of illegal firearms in the hands of illicit individuals despite the increases in the seizures by the police.

“Additionally the areas that we are concerned with are fire arms we saw an increase in that as well. We took 47 firearms off the street in 2017 and 36 in 2016.”

Further addressing the homicides Queeley added that although there was a reduction to only 23 homicides that is still too many and hailed the officers for having prevented much more.
\
‘”I want to give much commendation to the intelligence department, the tactical departments and the crime directorate because detection prevents. We have good intelligence that caused us to foil a lot of the blocks that were on going. I would urge you to continue in that vein.”

He however, noted that the he aims to have a greater community presence from the police officers in 2018.

“Something else I want to see in our year ahead is our community involvement. You would have realised that last year there were two community groups that were rolled out… I told the Permanent Secretary that I believe that the police should have a presence in all the police districts in terms of youth groups.

“You will also see as a part of that several social intervention strategies and that will run concurrent with all the other policing strategies that will be rolled out during the New Year.”
The Commissioner informed the officers that 2018 will provide opportunities for promotions.
“There are some vacancies that exist and very shortly the process to fill them will commence. We intend to take promotions in line with the policies that are laid out.” He then implored the officers to continue to improve on their efforts in 2017.