RIO DE JANEIRO (AP) — Reports are emerging of Brazilian health workers forced to intubate patients without the aid of sedatives, after weeks of warnings that hospitals and state governments risked running out of critical medicines. 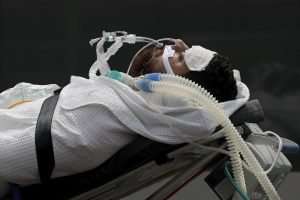 A 43-year-old patient suspected of having COVID-19 is transferred from an ambulance into the HRAN public hospital in Brasilia, Brazil, Wednesday, April 14, 2021. (AP Photo/Eraldo Peres)

One doctor at the Albert Schweitzer municipal hospital in Rio de Janeiro told the Associated Press that for days health workers diluted sedatives to make their stock last longer. Once it ran out, nurses and doctors had to begin using neuromuscular blockers and tying patients to their beds, the doctor said.

“You relax the muscles and do the procedure easily, but we don’t have sedation,” said the doctor, who agreed to discuss the sensitive situation only if not quoted by name. “Some try to talk, resist. They’re conscious.”

Lack of required medicines is the latest pandemic problem to befall Brazil, which is experiencing a brutal COVID-19 outbreak that has flooded the nation’s intensive care units. The daily death count is averaging about 3,000, accounting for a quarter of deaths globally and making Brazil the epicenter of the pandemic.

“Intubation kits” include anesthetics, sedatives and other medications used to put severely ill patients on ventilators. The press office of Rio city’s health secretariat said in an email that occasional shortages at the Albert Schweitzer facility are due to difficulties obtaining supplies on the global market and that “substitutions are made so that there is no damage to the assistance provided.” It didn’t comment on the need to tie patients to beds.

The newspaper O Globo on Thursday reported similar ordeals in several other hospitals in the Rio metropolitan region, with people desperately calling other facilities seeking sedatives for their loved ones.

It’s unclear whether the problem seen in Rio remains an isolated case, but others are sounding the alarm about impending shortages.

Sao Paulo state’s health secretary, Jean Carlo Gorinchteyn, said at a news conference Wednesday that the situation was dire in the hospitals of Brazil’s most-populous state. On Thursday, more than 640 hospitals were on the verge of collapse, with shortages possible within days, officials said.

His state’s health officials sent nine requests for intubation medication to the Health Ministry over the past 40 days, according to a statement Wednesday. Its last delivery was enough to cover just 6% of monthly needs in the state’s public health network, officials told

Federal Health Minister Marcelo Queiroga, who took over the post last month, said Wednesday that a shipment of sedatives was expected to arrive in Brazil “in the next ten days.” It is the result of a contract signed with the Pan American Health Organization.

He said two separate efforts to acquire medications on the international market are underway “to end this day-to-day struggle.”

For many weeks, the ministry has also been facing logistical constraints on getting oxygen delivered to hospitals across the country. Queiroga said it remains “a daily concern.″

A more contagious coronavirus variant, known as P.1, has been spreading across Brazil this year. It may also be more aggressive than the original strain, and health workers have reported patients requiring far more oxygen than last year.

The private sector has stepped up to help address some of the supply shortfall. A group of seven large companies donated 3.4 million doses of intubation drugs — enough for the management of 500 beds for six weeks — to the Health Ministry.

A first batch of 2.3 million was scheduled to arrive from China late Thursday at Sao Paulo’s international airport and would be distributed to states with critical shortages, the ministry said in an emailed response to AP questions about supply bottlenecks.

Last month, the Health Ministry requisitioned intubation medications from laboratories, reportedly as a means to distribute to the neediest hospitals. That has caused others facilities’ stocks to dwindle, said Edson Rogatti, director of an association of more than 2,000 hospitals nationwide.

“If we run out, the health sector will be in chaos,” Rogatti said on Globo News TV.

Shortages aren’t limited to the public sector. Brazil’s private hospital association published a survey Thursday in which nine of 71 institutions reported having supplies for five days or less. About half said they had enough for a week.

The city of Itaiopolis in southern Santa Catarina state this week reported shortages of both sedatives and oxygen. Neighboring Rio Grande do Sul state also reported supplies running out.

“The situation is desperate,” Rio Grande do Sul’s health secretary, Arita Bergmann, said in a statement Thursday. “We urgently need the Health Ministry to replenish hospitals’ stocks, or else intubated patients can wake up without medication, and that would be terrible.”

Monaco has announced it is easing health restrictions, without resolving fully whether fans would be allowed at its Formula 1 Grand Prix next month.

“Monaco is taking its decisions in the light of its own situation, in full sovereignty but also in mutual agreement with France,” the principality’s Minister of State Pierre Dartout told a press briefing.

He said that from Monday, the curfew would move to 9.00pm local time and there would be a controlled reopening of restaurants in the evening.

Reuters report that restaurants, which have been able to open only at lunchtime, may serve customers in the evening until 9.30pm but they are not allowed to play music and customers must return home by 10.00pm with a certificate from the restaurant owner. The provisions extend to 2 May, three weeks before the Monaco Grand Prix , which is scheduled for May 23.

“It is not a question of complacency, but a certain number of favourable developments have taken place,” Dartout said, saying an infection rate of the virus had fallen to 80 per 100,000 on Wednesday.

For the Grand Prix, a centrepiece of Monaco’s calendar, there will be a closed practice session on Friday but a crowd, limited to local residents and employees, will be allowed for qualifying on Saturday and for the race on Sunday, the government announced.

Monaco has not yet given any public indication of whether fans would allowed to watch from the stands, terraces and balconies, or whether the traditional influx of visiting fans would be permitted.

Vietnam’s health ministry called for the acceleration of its Covid-19 vaccine rollout on Friday as the expiry date of the south-east Asian country’s first batch of jabs supplied through the Covax scheme approaches.

Since it began its vaccination programme last month, Vietnam has inoculated about 73,000 people despite receiving nearly 1m AstraZeneca doses, 800,000 of which were obtained via the Covax vaccine-sharing scheme.

“The [AstraZeneca] Covid-19 vaccine has a shelf life of six months but the batch delivered to Vietnam on 1 April under the Covax scheme only has two months left till expiration,” the ministry said in a statement on Friday.

“We have to speed up the inoculation. It is not acceptable that a single dose of the vaccine is thrown out because of a failure in the rollout,” the statement added.

The health ministry requested all 19 localities which have started vaccine programmes to finish no later than 5 May, 26 days before the vaccines expire.

Vietnam has been praised globally for its record containing the virus through targeted mass testing and a strict, centralised quarantine programme.

Phuong Nguyen notes for Reuters that the country has kept its tally of cases to 2,800, and reported only 35 deaths since the pandemic began. Authorities are aiming to immunise 70% of Vietnam’s population and are seeking to obtain a total of 150m vaccine doses.

The coronavirus lockdowns and restrictions that Michigan’s governor, Gretchen Whitmer, enacted in March last year were among the nation’s toughest, and the governor’s leadership is thought to have saved lives. It also drew high marks from many in the state.

The same approach proved effective last fall when the second wave hit. Now, as Michigan faces another surge of cases and hospitalizations, its worst yet, Whitmer has changed tack.

Despite past success and growing calls for another lockdown from public health experts, and doctors managing hospitals with Covid patients, the governor is resisting further restrictions, and is instead largely relying on a vaccination rollout and a voluntary suspension of in-person dining services.

Several factors are driving the new approach, experts say. Among them is a growing sense of pandemic fatigue, and sustained pressure from conservatives. Eroding support from independents and Whitmer’s looming 2022 re-election race have also played a role. Many of those bearing the economic brunt of her lockdowns are donors and influential business leaders, said Bill Ballenger, a Michigan political analyst, and the governor appears to have been “scared straight”.

“I really do think the constant pressure over the last year is catching up, not just from the right and conservatives, but there are a growing number of people in the population, including independents and business persons who are Democrats, who are really angry at Whitmer,” Ballenger said.

The pressure to remain open continues even as cases and hospitalizations rise, putting Whitmer in an exceedingly difficult position. The surge hit soon after she lifted restrictions in early March, and Michigan’s two-week per-capita caseload now leads the nation. The state reached a bleak mark on Tuesday when over 4,000 people were reported hospitalized – the highest daily total of the pandemic. A high number of cases from Covid variants is also fueling the surge.

Among supporters strongly urging the governor to once again put restrictions in place are Dr Abdul El-Sayed, the former director of the Detroit health department. He noted that an increase in deaths has followed spikes in caseloads and hospitalizations, and said a new lockdown “would have a profound impact over the next couple weeks”.

He said: “Governor Whitmer showed a tremendous level of leadership last spring and fall, and that came with a lot of political blowback from conservatives, but she did the right thing – evidence shows that she saved lives, and we need that leadership now.” 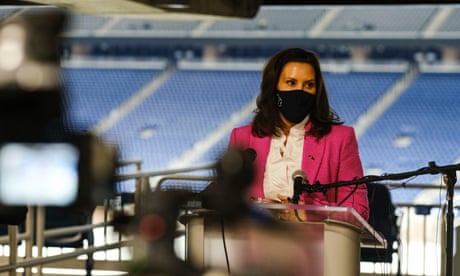