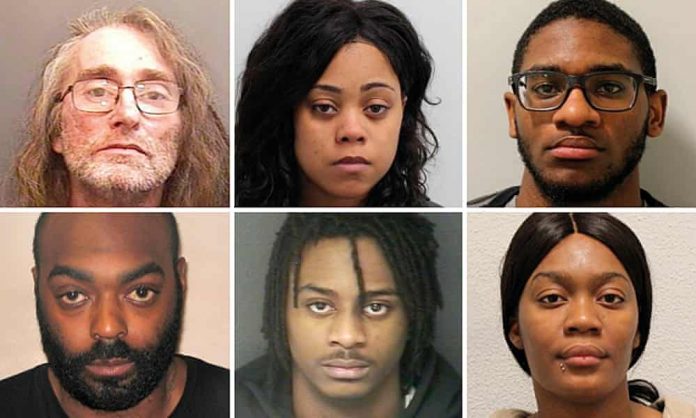 Seven gang members have been found guilty of running a sophisticated county lines operation in which heroin and crack cocaine were shipped from London to Cornwall with vulnerable young people exploited to sell drugs.

The “Billy line” resulted in many thousands of pounds-worth of class A drugs being sold to almost 100 users in Cornish towns including Bodmin and the surfing resort of Newquay, Truro crown court heard.

A jury on Tuesday found John Griffin, 56, of Bodmin, and Shanice Morrison, 28, of Tottenham, north London, guilty of conspiring to supply crack cocaine and heroin

The court heard that young people from north London were sent to Bodmin and dumped in the grubby flat of an addict, from where they sold heroin and crack cocaine that had been transported into the county in hired Mercedes and Audi saloons.

The operation to catch the gang, codenamed Ligament, culminated in 200 Devon and Cornwall and Metropolitan police officers raiding properties across Cornwall and north London this year.

Drugs, cash and knives were seized. When officers caught up with one gang member, he brandished a machete before being overpowered and arrested.

According to the National Crime Agency, the term “county lines” is used to describe how gangs from big cities expand their operations to towns, often using violence to drive out local dealers.

A common feature in county lines drug supply is the exploitation of young and vulnerable people. Dealers frequently persuade or force teenagers to hole up in a local property belonging to an addict or someone with mental health problems, a practice known as “cuckooing”.

Truro crown court heard how the Billy line’s mobile phones would send bulk text messages to addicts when a new shipment was on the way advertising what was available.

Two of the boys caught up in the line were forced to live in the flat of a 56-year-old Bodmin addict called John Griffin. The court was told he had been given heroin in exchange for the use of his property.

There was little attempt to hide the dealing. The boys, who were black, stood out in the small Cornish town with a largely white population. The gang did not care – their modus operandi was to move boys in and out quickly.

One of the boys – known as X – informed police he had incurred a drug debt of £55 with the gang and was told he could pay it off by dealing. He presumed he would be put to work near his home in north London and was astonished when he ended up 250 miles away in Bodmin, far from family, friends and familiar surroundings.

When he was spotted by the authorities he was taken away by police and social services but was replaced by a second boy – Y – who said he had been bundled into a car in London, driven to Cornwall and put up in Griffin’s flat.

Devon and Cornwall police believe Operation Ligament was a success not just because it disrupted the Billy line but because it also stopped at least a few young people from being exploited.

DI Peter Found, from Devon and Cornwall police, said: “We are happy we have totally disrupted this drugs supply network. That protects vulnerable people in this county and London. It sends a clear message to those who seek to traffic drugs into Cornwall. We will target traffickers and prosecute them.”

The gang members will be sentenced on 11 October.