WASHINGTON/CIUDAD JUAREZ, Mexico, Dec 19 (Reuters) – The U.S. Supreme Court on Monday said COVID-era restrictions at the U.S.-Mexico border that have prevented hundreds of thousands of migrants from seeking asylum should be kept in place for now, siding with Republicans who brought a legal challenge.

The restrictions, known as Title 42, were implemented under Republican former President Donald Trump in March 2020 at the beginning of the COVID-19 pandemic and gave border officials the ability to rapidly expel migrants to Mexico without a chance to seek U.S. asylum.

U.S. President Joe Biden, a Democrat, had campaigned on overturning Trump’s hardline immigration measures before taking office in 2021 but kept Title 42 in place for more than a year. The U.S. Centers for Disease Control and Prevention (CDC) said this year that Title 42 was no longer needed for public health reasons, and the Biden administration has said it wants it to end but will abide with any court rulings.

A federal judge last month ruled Title 42 was unlawful in response to a lawsuit originally brought by asylum-seeking migrants represented by the American Civil Liberties Union. The judge set the restrictions to be lifted on Wednesday, Dec. 21.

But a group of 19 states with Republican attorneys general sought to overturn that decision by intervening in the case and on Monday took their request to the conservative-leaning Supreme Court.

Hours later, Chief Justice John Roberts in a brief order issued a stay that will leave Title 42 in place until further notice from the court. The parties in the legal dispute have until Tuesday at 5 p.m. ET (2200 GMT) to respond, the court said.

After Robert’s action, U.S. Department of Homeland Security (DHS) said Title 42 “will remain in effect at this time and individuals who attempt to enter the United States unlawfully will continue to be expelled to Mexico.”

The Biden administration had been preparing for Title 42 to end on Wednesday and press secretary Karine Jean-Pierre said on Monday that the White House was seeking more than $3 billion from Congress to pay for additional personnel, technology, migrant holding facilities and transportation at the U.S.-Mexico border.

The push for additional resources came as U.S. authorities had been preparing for the possibility of 9,000 to 14,000 people per day trying to cross into the United States if Title 42 was lifted, Reuters and other outlets have reported, around double the current rate.

The Biden administration has been weighing plans to prepare for Title 42’s end, with government officials privately discussing several Trump-style plans to deter people from crossing, including barring single adults seeking asylum at the U.S.-Mexico border. 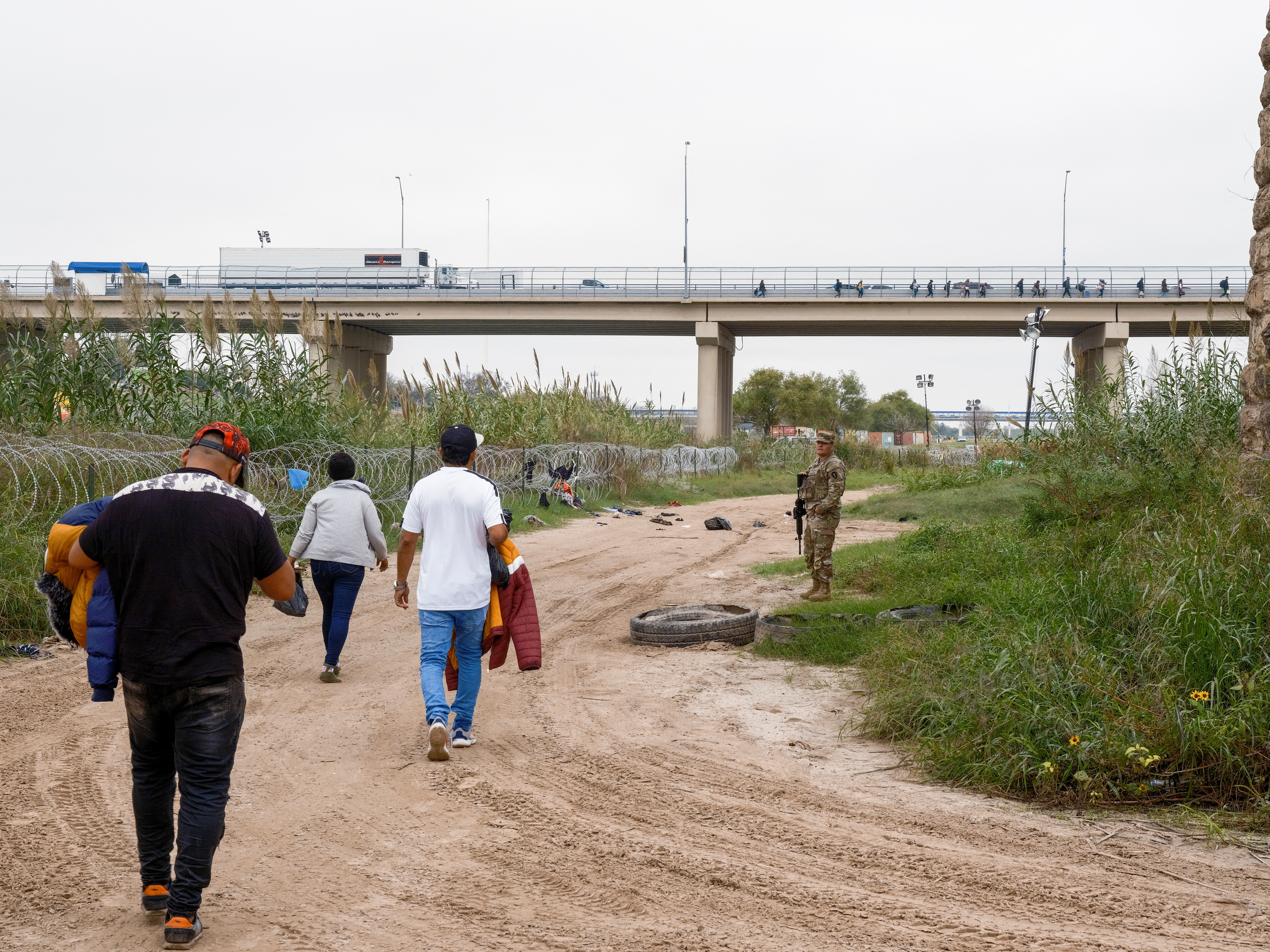 [1/10] A group of migrants walks towards a border patrol processing area, accompanied by a Texas National Guard member, as U.S. border cities are bracing for an influx of asylum seekers when COVID-19-era Title 42 migration restrictions are set to end, in Eagle Pass, Texas, U.S. December 19, 2022. REUTERS/Jordan Vonderhaar

DHS last week updated a six-pillar plan that calls for the expanded use of a fast-track deportation process if Title 42 is terminated. The revised DHS plan also suggests there could be expansion of legal pathways for migrants to enter the country from abroad, similar to a program launched for Venezuelans in October.

Since Biden took office in January 2021, about half of the record 4 million migrants encountered at the U.S.-Mexico border have been expelled under Title 42 while the other half have been allowed into the United States to pursue their immigration cases.

Mexico accepts the return of only certain nationalities, including some Central Americans and, more recently, Venezuelans.

For months, El Paso, Texas, has been receiving large groups of asylum-seeking migrants, including many Nicaraguans who cannot be expelled to Mexico. On Saturday, the city’s mayor declared a state of emergency to move migrants from city streets as temperatures had dropped below freezing.

U.S. Representative Henry Cuellar, a Democrat whose South Texas district borders Mexico, has said U.S. border officials told him that an estimated 50,000 people are waiting in Mexico for the chance to cross.

“If Title 42 remains in place, we must continue waiting,” said Venezuelan migrant Lina Jaouhari, who said she had attempted to enter the United States from Ciudad Juarez on Dec. 1 but had been sent back to Mexico under Title 42. “It won’t do any good to try to cross again if we know they will send us back.”

In El Paso, shelters have struggled to provide for arriving migrants even as many ultimately are headed to join relatives in other parts of the United States.

Rescue Mission of El Paso, a shelter near the border, last week housed 280 people, far beyond its 190-person capacity, with people sleeping on cots and air mattresses in the chapel, library and conference rooms, said Nicole Reulet, the shelter’s marketing director, in an interview with Reuters.

“We have people where we tell them, ‘We have no room,'” she said. “They beg for a place on the floor.”