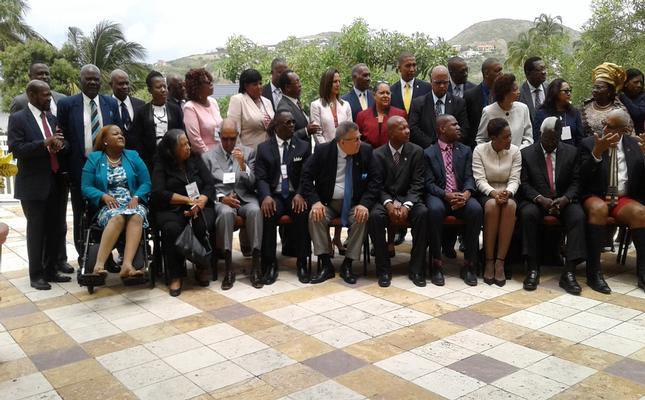 Basseterre, St. Kitts – The 42nd Commonwealth Parliamentary Association’s regional conference opened in St. Kitts on Monday with the focus on how parliaments in the region and the media can work together for a democratic society.

At the opening ceremony of the conference, speaker of the National Assembly Michael Perkins stated that the theme “Enhancing democracy through the use of Parliamentary System and the Media” was chosen out of need for more input from the media in parliamentary democracy.

“The media, that fourth branch of governance or the fourth arm of government, as it is commonly know by over years, is important,” he said. “We know that there is a love-hate relationship between politicians, parliamentarians and the media, but it is my hope that during this conference, while we discuss during our plenary sessions, that we would continue to discuss and analyse why we had this love-hate affair.”

Perkins added that there is also hope that delegates use the conference to find to find solutions that will foster better growth between parliamentarians and the media.

“Our regional CPA Branch, I believe, is ideally placed to forge better links that would make that above objective of fostering a better relationship with the media possible,” he said. “Having said that, the truth of the matter is that throughout our region our parliamentary branches are not functioning at the level to which they should.”

“If, indeed, parliament is a key pillar of our democratic system of government, we must pay more than lip service in this region to stemming the callous undermining and retrograde disposition of some of our parliaments,” Douglas said. “We owe it to ourselves and to this and future generations because a people who have known democracy will resist any and all attempts to reverse the course of our democratic evolution, by any and all means.

“It is my hope that this conference can be used to restore rationality and propriety to the proceedings of our parliament,” he added.

Douglas added that parliament shouldn’t exist merely as tools to protect government and to demean their opposition. He then referenced the motion of no confidence file in Speaker Perkins earlier this year that was rejected.

“A motion of no confidence brought by the leader of the opposition earlier this year on the account of the conduct of the affairs of the parliament was refused to be heard,” he said. “It was instead withdrawn by the speaker himself, using rules that he devised.  He sat in his chair, debated the merits of the motion against him – all by himself, subjugated opposition members as he did so, and ejected them from the parliament when they objected to his undemocratic posture.”

The acting prime minister of St. Kitts and Nevis, Shawn Richards, urged the delegates from across the region to ensure that the discussions regarding the role of the media are implemented.

“For quite some time, the good office of the Commonwealth Parliamentary Association has sought to urge parliaments and their members to champion the protection of  the media in support of good governance and democracy, and has been a pioneer in this regard,” he said. He added that the theme was timely as both the media and parliament must work together to enhance democracy.