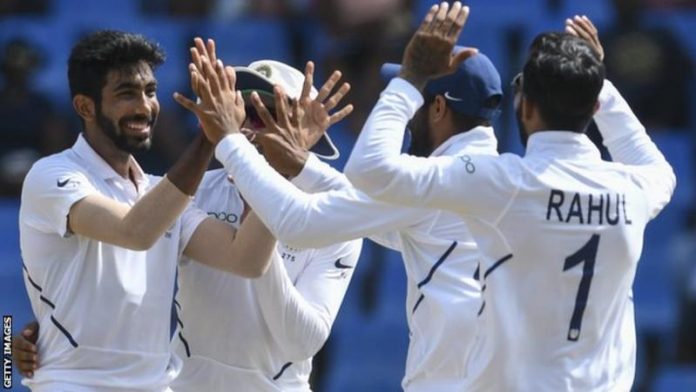 India seamer Jasprit Bumrah took five second-innings wickets for just seven runs as the hosts fell to 100 all out.

Only Roston Chase (12), Kemar Roach (38) and Miguel Cummins (19) reached double figures as they were bowled out in under 27 overs.

The visitors posted 297 in their first innings before West Indies replied with 222 of their own.

With a first-innings lead of 77, India extended their advantage through Kohli (51), Ajinkya Rahane (102) and Hanuma Vihari (92) before declaring to leave Jason Holder’s team with an unlikely run chase.

In reply, West Indies were five wickets down before the eighth over and their 10th wicket stand of 50 between Roach and Cummins was their highest of the second innings.

Victory puts India joint-top of the inaugural World Test Championship table, albeit after just one game. The second Test begins in Jamaica on Friday.