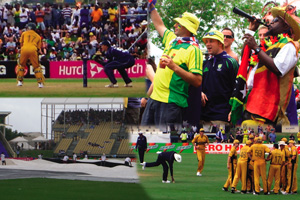 They came for the game but definitely stayed for the party as Cricket World Cup fans started the fetes inside the stadium on Wednesday and continued the merriment into the early hours of Thursday morning.

Some cricket connoisseurs came out early to see the first ball of ICC cricket being bowled in St. Kitts while others opted to join the game a bit later in the morning. Tickets were reportedly still being bought up to three hours before the match ended.

One excited fan told The Observer that she didn’t know the final score but she had enjoyed the game.

“I am not really a cricket person so I didn’t pay much attention to the game. Maybe if it was West Indies playing I would actually watch some of what was going on. All in all I had fun liming with my friends and just enjoying the atmosphere,” she said.

Some 2800 spectators turned up to witness Kittitian history as the gates to the stadium were opened at 7:30 a.m. While most of the stands were scant, the western mound was packed to capacity with eager fans. The temporary stand on the eastern end of the stadium was also filled, mainly with supporters for the Scotland team.

The party mound had a low turnout with under 200 persons, but what they lacked in numbers they made up for with spirit as the Aussies and Scots booed and jeered the opposing teams and sang songs from their home to either rally their team or ridicule the opponents. Not even a brief downpour of rain could dampen spirits at the event.

Some locals were not pleased with what they referred to as the ‘white is right’ policy. Some visitors were seen sitting in folding chairs and sheltering from the sun under large umbrellas, items one local said were confiscated from him by gate security.

“Why must our own people always treat their own like that? They took away my umbrella saying it had a pointed end and now I come inside I see the visitors sitting under the pointed end umbrellas. Plus I was told that no chairs would be allowed in and they were allowed in with theirs. I have no problems with all the rules and restrictions but the rules should apply to all,” the irate cricket goer said.

Persons headed to the Independence Square after the match ended around 5 p.m. to visit the stalls erected there and to enjoy the dynamic music of the Small Axe Band until late that evening.

ICC CWC 2007 Chief Operating Officer Don Lockerbee and other local and foreign stakeholders attended a meeting on Thursday morning during which it was said that the ICC COO expressed his satisfaction with the end result of the stadium and the game itself.

Horatio Versailles, CEO and Managing Director of World Cup Cricket St. Kitts and Nevis Ltd. said that the attendance on the opening day had fallen a bit below expectation.

“A lot of persons did not bother to come after they were denied tickets to the better stands. This was due to the fact that sponsors had reserved quite a number of tickets and those tickets which they had decided they would not be using were only put back onto the market last Friday. At that point people had already decided that if they couldn’t get the seats they had wanted they would not go to the game, so most did not reapply for those tickets,” Versailles said.

Officials agreed though that St. Kitts was able to avoid two of the major difficulties experienced at other venues, running out of food and opening the gates on time. They said that there were no reported security incidents nor traffic problems, which was not as they commented that Kittitians and Nevisians were a well-behaved people.