Cuban migrants board the Carnival Paradise cruise ship on Friday.

The video captured the impromptu encounter Friday as the Carnival Cruise liner, Carnival Paradise, sailed from Tampa, Florida to Cozumel, Mexico.
The clip shows passengers clapping and cheering as the migrants neared the ship.
“They didn’t have paddles,” said passenger Cintia Zingoni, who filmed the video. “It wasn’t really a boat. It was a piece of furniture, maybe a cabinet and they made it as a boat.”
Zingoni, a real estate agent from Orlando, Florida, was on the ship with her family and friends when they witnessed the event.
Her video shows what appears to be a small piece of fabric the migrants were using as a sail and styrofoam attached to the sides of their vessel for flotation. Zingoni said it also appeared the migrants were using a pot lid to paddle. 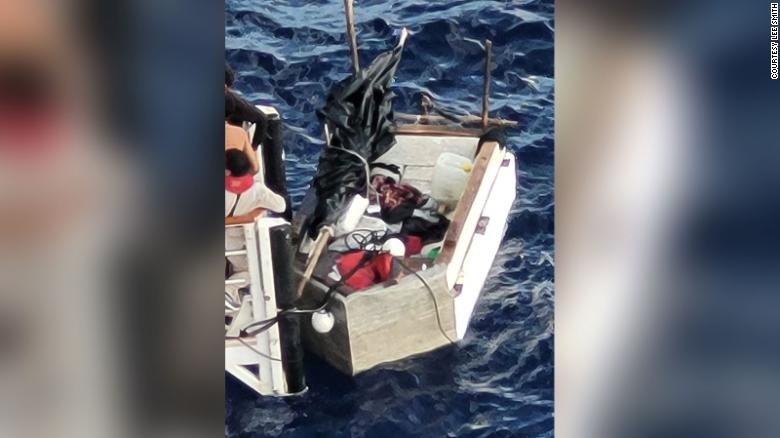 A screenshot of the video shows the dramatic rescue.
The migrants were welcomed on board the ship where they received a medical check-up, food and clothes, according to Carnival Cruise Lines spokesman Matt Lupoli. When the boat reached Cozumel, they were turned over to Mexican officials, he said.
According to Zingoni, the ship’s captain announced to passengers that the migrants were dehydrated but otherwise fine.
“I felt sad. Everyone on the boat was dancing and having fun and they were dying,” Zingoni said. “That was almost a suicide mission to go inside that piece of wood.”
Fellow passenger Lee Smith said the weather that evening took a turn for the worse.
“As we headed toward Mexico we were going fast to make up for lost time, but there was a thunderstorm and lightning behind us in the area where we had left,” he said. “Good thing we picked up the people in the raft.” 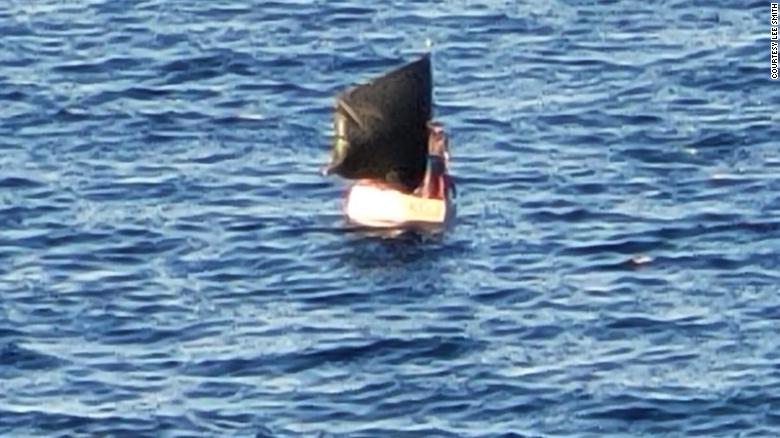 A screenshot from the video shows the migrants’ makeshift raft.

The dramatic rescue comes as US officials report a spike in Cubans trying to leave the communist-run island, where ruling officials blame US sanctions for a cratering economy.

Cubans who reach the United States and ask for asylum are typically able to gain permanent residency under a special status granted by the 1962 Cuban Adjustment Act. Cubans picked up at sea by the US Coast Guard are usually returned to the island.

As Cuba deals with growing power outages and food shortages, a record number of Cubans have left the island either by crossing into the US from the southern border with Mexico or by taking to the seas in small boats and rafts that US officials say are often pushed off course by ocean currents.

According to US Customs and Border Protection, more than 175,000 Cubans have arrived in the US from Mexico since July last year. In the same period, more than 4,500 Cubans intercepted at sea have been returned to Cuba, the Coast Guard said in a statement Tuesday.