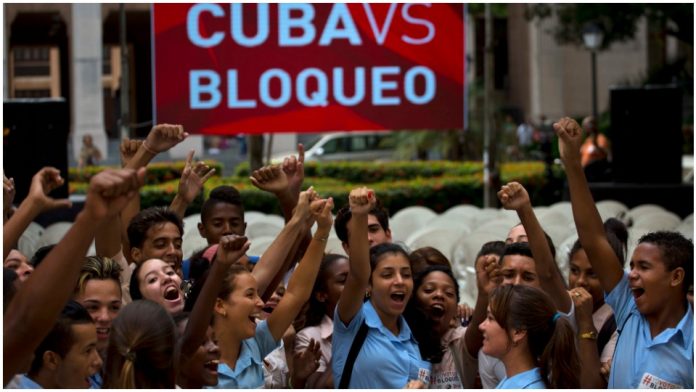 - Advertisement -
Cuban students in Havana on Oct. 26, 2016, after the United Nations General Assembly voted 191-0 to end the blockade


For the 28th consecutive year, Cuba will be asking the United Nations General Assembly on Nov. 7 to approve a resolution calling for an end to the U.S. economic, commercial, and financial blockade of Cuba.

Every year, in preparation for this vote, Cuba’s Foreign Ministry delivers a comprehensive report to the various national delegations represented in the Assembly. It updates them on adverse effects of the blockade, especially new ones.

Speaking to reporters on Sept. 20, Cuban Foreign Minister Bruno Rodriguez released Cuba’s report on the blockade for 2019. It’s 37 pages long and concentrates on the impact of the blockade showing up between April 2018 and March 30, 2019.

Its format is similar to that of earlier reports. This report, like previous ones, utilizes hundreds of examples drawn from daily life in Cuba to demonstrate hardship caused by the blockade.

The 2019 report once more analyzes blockade-related damage according to categories like violations of international law, genocide, the trashing of human rights, and economic hardship affecting every corner of Cuban society.

This report pays special attention to fallout from recent U.S. intensification of the blockade. It points to the hobbling of embassy operations in the two capitals, and to larger U.S. fines against third-country banks and companies involved with Cuba.

There’s mention of Cuban tourist facilities being off limits to U.S. visitors and of renewed restrictions on people-to-people travel to Cuba. The report prominently features the U.S. government’s turn, after a lapse of 26 years, to implementing Title III of the Helms Burton Law of 1996.

Under Title III, former owners of nationalized properties, or their heirs, can now appeal to U.S. courts to gain compensation from third-country businesses occupying those properties. The idea is to advertise foreign investment in Cuba as extremely risky business. Cuba’s economic development thereby takes a hit, in theory.

The new Cuban report is strong on details. It reviews U.S. laws and regulations buttressing the blockade over the course of decades. The report emphasizes the “social impact” of the blockade. It cites shortages, delays, unmet goals, and administrative snarls weighing on the healthcare, education, sports, cultural, and information-technology sectors.

According to the report, “The plans and programs of the ‘dirty war’ against Cuba have always included maneuvers aimed at promoting hunger and disease among the Cuban people and thereby undermining support for the Revolution.”

The blockade’s role in causing operational dysfunction in various sectors of the economy receives top billing in the report. It systematically documents troubles in construction, infrastructure, the biopharmaceutical industry, tourism, communications, information technology, industrial development, the energy sector, and banking.

Foreign banks, leery of being penalized by the U.S. Treasury Department, are shown to have often failed to transfer funds destined for Cuba. They’ve charged high commissions. Over 100 foreign banks now refuse to offer any services to Cuban banks. The upshot is that, most recently, Cuba’s banking operations registered annual losses 35% greater than those of the previous year.

In the time frame covered by the report, Cuba’s economy suffered $4.344 billion in losses. The report indicates that over the course of almost six decades the U.S. economic blockade has deprived Cuba of $922.6 billion (adjusted for inflation).

Surveying U.S. violations of international law, the report spotlights the “extra-territorial” thrust of U.S policies on Cuba, which in fact violate the sovereignty of many nations. The report ends with a long list of examples of resistance to the blockade both worldwide and within the United States. The most prominent of them is the overwhelming rejection of the blockade by the UN General Assembly every year for 27 years.