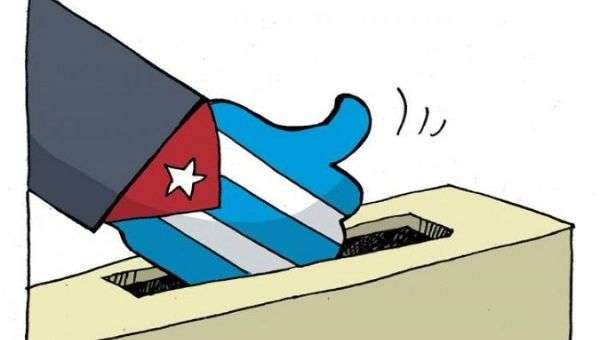 - Advertisement -
Havana (VOA)— Cubans voted Sunday in municipal elections amid a grave economic crisis that could weaken turnout and with the opposition charging some of its candidates have faced unfair pressure.

More than 8 million Cubans aged 16 and older (of a population of 11.2 million) are eligible to cast secret ballots to select more than 12,400 municipal delegates, or councilors, from the 27,000 candidates nominated by show of hands in neighborhood assemblies.

President Miguel Diaz-Canel, who had arrived back in Cuba earlier Sunday after a trip that took him to Algeria, Russia, Turkey and China, went with his wife Lis Cuesta to vote at a polling station in Playa, west of Havana.

He later told reporters that the electoral process confirmed the political and social stability of the island, despite the “economic suffocation” he said the U.S. was imposing on Cuba.

The government had mounted an intense get-out-the-vote campaign on social media, as well as in the press and on television — both controlled by the ruling Communist Party, which oversees the election process but does not nominate candidates.

The opposition platform known as the Council for the Democratic Transition in Cuba (CDTC), which promotes change and pluralism in the country through legal means, called on people to abstain, citing unfair pressure by the government.

Its vice president, Manuel Cuesta, told AFP that three of the group’s candidates had been prevented “by the political police” from participating in neighborhood assemblies because they appeared to have a good chance of winning.

He said a fourth candidate, Jose Cabrera, was nominated in the southeastern city of Palma Soriano but never made it to the ballot over “threats of losing his job” and other difficulties.

The Cuban government has branded opposition members as U.S. “mercenaries.”

These elections are the first step in a unique electoral system.

Councilors elected Sunday will form municipal governments that will propose 50% of the candidates for provincial assemblies and the National Assembly, which in turn elects the Council of State and the Cuban president from among its members.

The other 50% are put forward by social organizations close to the government.

In theory, the system allows any Cuban to reach parliament, but the opposition maintains that Communist Party militants can prevent any opposition member from being elected.

Adding uncertainty to the election — the first since Diaz-Canel came to power in 2018 — is the economic crisis that has brought shortages of food and medicine, and daily blackouts to the island, fueling an outflow of migrants and potentially increasing abstentionism.

Candidates who fail to win with an outright majority this Sunday will face a runoff on December 4.