Cabrera is leaving the post of ambassador to St. Kitts and Nevis after the completion of his tour of duty. The ambassador first presented his credentials Sept. 10, 2013, and will officially depart the federation this weekend.

In his farewell message to Prime Minister Harris, Ambassador Cabrera said he is leaving the post feeling satisfied with what he was able to accomplish, particularly as it relates to further strengthening the bond shared between both nations.

“I think that we have an excellent bond historically, and in the last year, that bond has gotten stronger, and so I am very pleased with that result,” said Cabrera. “I would like to take this opportunity to express gratitude on behalf of the government and people of Cuba for the unwavering support given by the government of St. Kitts and Nevis to my people, particularly in the international arena and at the United Nations.”

“Cuba has long pursued a path of integration with the Caribbean islands and it has long proven itself to be a reliable ally of the people of the Caribbean region, particularly in their moments of need,” Harris said.

He noted that Cuba’s support for the federation’s human resource development is one of the most outstanding legacies of support that St. Kitts and Nevis enjoys. “Our own human resource capacity and capability have been strengthened by the support we have had over the years from the government of Cuba across a range of human services, and we want to place on record our gratitude and deep appreciation for the responsiveness of your government for helping us in developing our people, for helping us provide an opportunity for tertiary level participation by our citizens,” Harris said. “The free access we have had to the institutions of learning in Cuba certainly would help us move more progressively along that pathway of having more of our people graduating from the tertiary level institutions.”

Harris further stressed that St. Kitts and Nevis will continue to support the Republic of Cuba in the international arena, adding, “Whether it is on the issue of the blockade of Cuba, which we have opposed consistently, and other areas in terms of candidatures, St. Kitts and Nevis has given support to Cuba because we know that we could rely upon Cuba as a good friend,” he said.

Cabrera also paid a courtesy call on Gov.-Gen. His Excellency Sir S. W. Tapley Seaton, GCMG, CVO, QC, JP Oct. 31, at which time the governor-general thanked Ambassador Cabrera for his “outstanding service and for the assistance provided to St. Kitts and Nevis by way of the training of our citizens in the field of medicine, in particular.”

Last year, Prime Minister Harris visited His Excellency Cabrera Nov. 25, 2016, at the Cuban Embassy to pay his respects on the passing of the late Cuban President Fidel Castro. Visibly touched by the prime minister’s visit, the Cuban ambassador said “after these beautiful words coming from the prime minister, I have no words but to express my appreciation.” 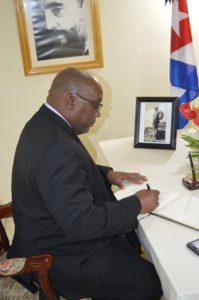 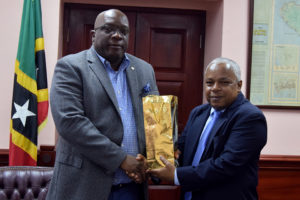 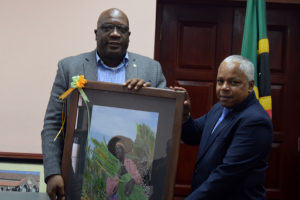