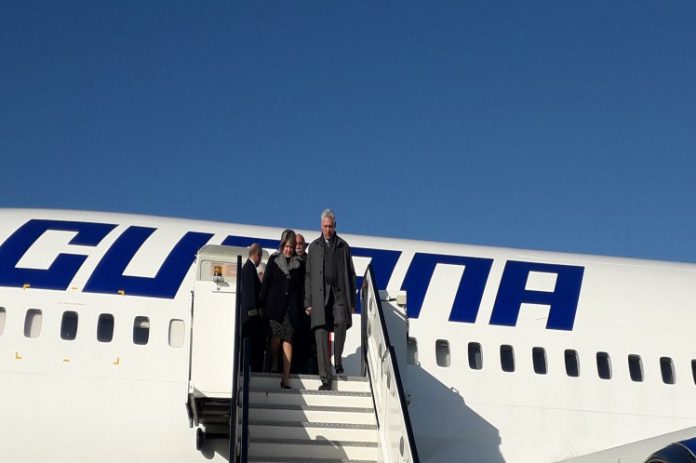 Dublin, Oct 20 (Prensa Latina) The President of Cuba, Miguel Diaz-Canel, arrived on Sunday in Ireland on an official visit, at the start of a European tour that will also take him to Belarus, Russia and Azerbaijan.

Upon his arrival at the Dublin International Airport, he was welcomed by the director of protocol of the Irish Foreign Ministry, Emma Madigan.

The official reception will take place on Monday at the residence of his host, President Michael Higgins, and then Diaz-Canel will pay a courtesy visit to Prime Minister Leo Varadkar.

The Cuban Head of State and the accompanying delegation is visiting several sites of historical and cultural interest in the Irish capital this Sunday.

Diaz-Canel is also scheduled to meet with Cubans residing in Ireland, and with Irish friends of the island, before leaving Tuesday morning for Belarus.

The official visit of Diaz-Canel, the first one made by a Cuban Head of State to Ireland, follows a similar one made by Higgins in February 2017 to Havana, where he met the then president Raul Castro.

Cuba and Ireland established diplomatic relations in 1999, and signed a political dialogue agreement in 2015.