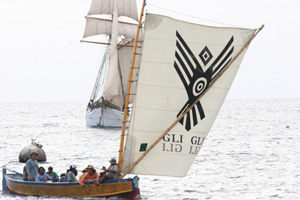 Minister with responsibility for Culture on Nevis the Honourable Hensley Daniel encouraged Nevisians, in particular the youth, to use the visit by a group of Carib Indians to Nevis from Dominica, as an opportunity to reconnect with the people who have inhabited the Caribbean for hundreds of years.

Mr. Daniel addressed the youth on the grounds of the Museum of Nevis History, near the Charlestown Pier, while he officially welcomed the crew of the Gli Gli Expedition to Nevis. Earlier that afternoon, they had received a rousing welcome from hundreds of curious onlookers who had gathered at the Charlestown Pier late afternoon on Monday May 07, 2007 to witness their arrival.

“See this as an opportunity to reconnect with the people who came and stayed and so whenever we enjoy the modern facilities of today’s living, we can remember that there are people in our Caribbean who have maintained their standard and quality of living, to suit themselves and maybe as we are challenged to accept the styles of living from the north… we will find that we may not necessarily need to go to the excesses that we sometimes do in our community,” he said.

The Honourable Minister told the visiting Caribs that the Nevis Island Administration (NIA) welcomed the opportunity to help build the consciousness particularly as the visit came at a time when black Africans celebrated the 200th anniversary of the abolition of the slave trade. He gave thanks to their input as Carib and Kalinago people, the Caribbean people, that Nevis today enjoyed a society in which every creed and race have found an equal place.

The group of 11 Caribs sailed into Nevis in a traditional Carib canoe and were accompanied by a support ship Fiddlers Green with eight crew members and an accompanying crew of eight from Antigua.

Meantime, in an interview with the Department of Information Mr. Paulinus Frederick, Head of the Carib group, chief musician and lead spokesperson, explained that the exposition through the Leeward Islands which will culminate in the British Virgin Islands, served to raise the consciousness of the role played by the Carib people in the development of the Caribbean.

“Our ancestors were the first inhabitants of this entire region and we too played a role in the development of this region. We have been protecting our islands and we have also been protecting our culture. Some of the main things we are really doing are to preserve and to maintain the Kalinago culture.

“Some of it has disappeared and through research and contacts with other groups especially in Guyana, we were able to rediscover some of the aspects of our culture that had been forgotten and we are very grateful to have it. We are here to raise the consciousness of the Leeward Islands and to make persons be aware of the role that we have played in the development of this entire region,” he said.

British Virgin Islander and Co-ordinator of the Gli Gli Project Mr. Aragorn Dick-Read explained that the Gli Gli Project started in 1995 as a result of a chance encounter with Mr. Jacob Frederick a Carib activist and artist who had a dream to build a canoe and sail it from Dominica to Guyana.

Together with master boat builder Mr. Etienne “Charlo” Charles the boat was constructed and in 1997 they sailed the Gli Gli canoe with a group from the Salybia Carib Community to Guyana.

The BBC documented the journey from the concept, construction of the canoe in the forest of Dominica and the first expedition of the Gli Gli 10 years ago. The film was made in 1999 which Mr. Dick-Read described as an early version of Reality TV.

“This is a film that shows the voyage down the islands from Dominica so the Gli Gli canoe reconnected all the Carib tribes throughout the southern Caribbean and this is exactly 10 years ago this year. We stopped in Martinique and St. Lucia, St Vincent, Grenada, Trinidad and Guyana eventually we went through the Orinoco Delta.

Prior to the second expedition, the canoe was on exhibit at the Nelson’s Dockyard in Antigua and had sailed twice in the Antigua Yacht Regatta.

Before the expedition sets sail, the Carib group hosted a performance for a number of school children today and will hold an open day at the Oualie Beach Hotel on Wednesday.