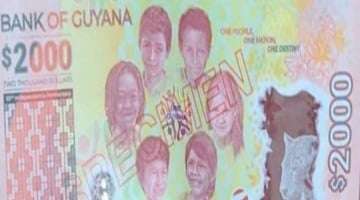 CNW- In another few weeks, the Government of Guyana will launch a two thousand dollar bill (one Guyana dollar=US$0.004 cents).

Governor of the Bank of Guyana, Dr Gobind Ganga, says the new currency note will go into circulation after all of the administrative procedures such as publication in the Official Gazette, alerting the public about the security features and presenting one of the notes symbolically to President Irfaan Al.

“We are going to do it within three weeks. We are really targeting Mashramani time,” he said, adding that the new currency note was expected to go into circulation to commemorate Guyana’s 55th Independence anniversary but that was delayed due to the COVID-19 pandemic.

“It’s coming out. It’s really nice and it has our logo which is of recent, One Guyana, and it carries our national flower, our national flag. It’s a reflection of our cohesiveness and our natural and national heritage that we want to portray,” he said.

Mashramani, often abbreviated to “Mash”, is an annual festival that celebrates Guyana becoming a Republic on February 23, 1970.

Ganga said the GUY$2,000 note will depict the One Guyana unity theme and is part of plans to commemorate Guyana’s 55th Independence anniversary.

He sad it would not have been a good idea to have introduced a higher denomination because of expected currency revaluation in the coming years.

He said Guyana may have to return to one dollar, five dollar and 10 dollar notes because “the currency shouldn’t be depreciating any further.”