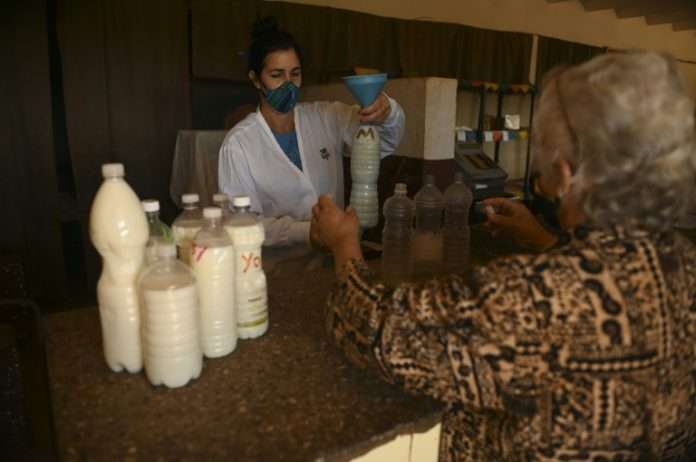 In the early days of communism in Cuba, Fidel Castro had pledged that every child under seven would have a liter of subsidized milk every day.

For some time, they did — but today, many go without.

To circumvent the US embargo against Cuba and lagging domestic production, milk has to come from the other side of the world in an obstacle race that deprives many on the island of the staple.

Regla Caridad Zayas, a 59-year-old diabetic, said the milk powder that the Cuban state supplies monthly to her and others with special dietary needs dried up months ago.

She is supposed to get a kilo of powder, which makes 10 liters (2.6 gallons) of milk, every month.

Sitting at a rickety table from which she sells coffee outside her house, Zayas said the bodegas, or subsidized food stores, no longer carry the commodity.

In the supermarket, it is also nigh impossible to find: milk has become the latest casualty in a long history of chronic food shortages in Cuba, which on Monday marks six decades of US sanctions.

And it will continue to be in short supply in Havana and four other provinces, due to a lack of “financing, boats and suppliers,” Internal Trade Minister Betsy Diaz said in October.

Official Cuban data shows that the island produced 455 million kilograms of fresh milk in 2020, far short of what it needs.

According to the PanAmerican Dairy Federation, each person should have access to 150 liters of milk per year — some 1.6 billion liters, and about the same in kilograms, for Cuba’s 11.2 million inhabitants.

The cheapest and easiest would be to get the milk from the United States — one of the world’s largest exporters and less than 200 kilometers (124 miles) from Cuba’s coastline.

Since 2000, food products have been excluded from the US embargo on trade with Havana. But Cuba must pay cash and in advance — onerous conditions for a country in deep economic crisis, with little foreign exchange and no access to loans.

Getting products from the other side of the planet is not easy, either: more than 10,000 containers of food and other products were stuck last month in ports around the world due to pandemic supply chain issues, the government said.

For decades, revolutionary leader-turned-president Fidel Castro made a point of supplying cheap, subsidized milk to all children under the age of seven and people with chronic diseases.

His brother and successor Raul proposed in 2007 to go even further by “producing milk so that all those who want to drink a glass of milk can do it.”

But today, even the guaranteed monthly ration of three kilos of powdered milk for children is running out. For other recipients such as Zayas, there is none.

“Truly, everything is disappearing,” said Claudia Coronado, a 29-year-old mother of two children aged three and seven, while standing in one of Havana’s ubiquitous food queues.

“We were used to not having chicken for a month, but milk, that was always sacrosanct.”

“I have a daughter of eight, she’s no longer getting milk,” said Jenny Mora, 29, who said she often has no choice but to turn to the black market and pay exorbitant prices.

The store outside of which the two women are queuing only accepts foreign currency — itself also only available on the parallel market.

A sachet of one kilogram (two pounds) of milk powder costs $6.30 — a fortune in a country where the average monthly salary is $163.

Economist Omar Everleny Perez said that without government help, it was more profitable for farmers to sell their product on the black market.

Farmer Domingo Diaz, 79, blames the US embargo for “about 90 percent” of the milk shortage.

He blames the communist government for the rest.

Though it raised the purchase price to help producers, the government did nothing to secure access to cow feed, he said.

“The milk problem affects everyone, it drives me mad, too,” said Diaz, as he tried to squeeze milk from a lean beast.