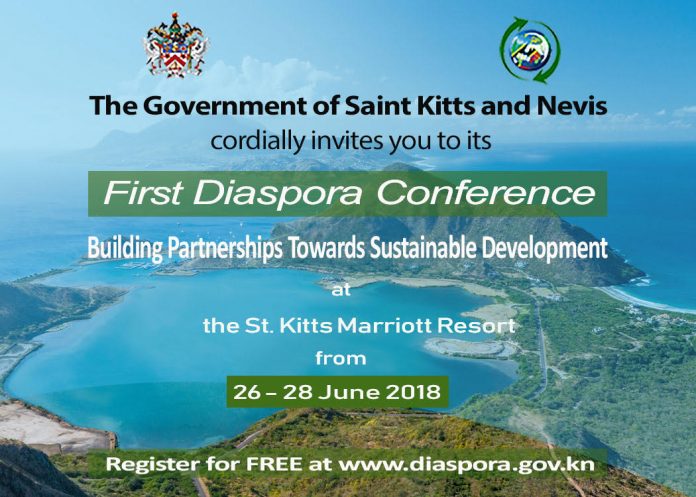 The following remarks from Deputy Prime Minister the Honourable Shawn Richards were made at the opening ceremony of the first-ever St. Kitts and Nevis Diaspora Conference and Expo at St. Kitts Marriott Resort today:

I am delighted and honoured to address this auspicious gathering of some 300 nationals from the diaspora who are participating in the first-ever St. Kitts and Nevis Diaspora Conference & Expo.

As defined broadly, the diaspora includes both you, as migrants, and your descendants who maintain ties with us in St. Kitts and Nevis, thereby helping to integrate and assimilate your home country into the dynamic global economy.

These ties take many forms and make a significant socioeconomic impact on this country.  In essence, these strong connections facilitate the transfer of invaluable ideas, knowledge, resources, and skills back to St. Kitts and Nevis.

My Team Unity Government therefore conceptualized this very important Conference and Expo in an attempt to formalize the role that all of you in the diaspora should play in our crafting and implementation of an inclusive sustainable growth strategy in St. Kitts and Nevis.

Under such a strategy, my Government intends to execute policies that will promote resilience and reduce volatility as well as our vulnerability to economic shocks that can hamper our progress in achieving the Sustainable Development Goals (SDGs) including poverty reduction.

Researchers and economists the world over, including those who work for esteemed institutions like the World Bank, have long held that diaspora populations play a critical role in supporting sustainable development in their home countries.

According to the United Nations’ International Fund for Agricultural Development (IFAD), “The potential for synergy in connecting the scale of remittances to reach the SDGs is clear: one billion senders and receivers and a projected US$6.5 trillion in international remittances will be sent to developing countries between 2015 and 2030.”

The India-born economist who resides in the United States notes that remittances act as a kind of insurance because, “Unlike private money, which tends to leave the country at the first sign of trouble, remittances increase when the family back home is in trouble.”

Development economists such as Dilip Ratha acknowledge that remittances tap the incomes of diaspora populations, but the greater goal must be that of mobilizing their wealth and resources so that they are brought in as full development partners.

My Government recognizes that you have long been our partners by helping to support spending on education, health care and a wide range of consumption.  We recognize that your support has been resilient and stable even when other capital flows to the country have stalled or reversed most notably during the global financial crisis of 2007.

My Team Unity Government also recognizes that our nationals who reside abroad are deeply tied to the land and to the people of St. Kitts and Nevis.  Moreover, many of you yearn to be involved more meaningfully in the development of the Federation.

The Government of St. Kitts and Nevis through its Ministry of Foreign Affairs has therefore planned this First Diaspora Conference in recognition that we want you to share even more in our vision to help us build a stronger, more resilient country.

We have thus taken the opportunity to engage our large diaspora population by organizing this Diaspora Conference & Expo right on the heels of the Anguilla, Nevis & St. Kitts Associations Reunion (ANSAR), which was just hosted in the Federation by the St. Kitts-Nevis Returning Nationals Association.

The 18th edition of the biennial reunion garnered wide participation from St. Kitts and Nevis associations around the world, including those in Montreal and Toronto and other parts of Canada, Miami and New York and other areas in the United States, as well as Birmingham, Leeds and other cities in the United Kingdom.

These diasporic St. Kitts and Nevis cultural associations – in addition to overseas-based specialty charity organizations such as Hearts and Hands for Nevis, Inc. and the Sandy Point Benevolent Society (SPBS), to name just a couple – epitomize the power of diaspora philanthropy.

Your diasporic associations provide academic scholarships and support to students in St. Kitts and Nevis and also recognize and award role models who provide distinguished service in uplifting their respective communities throughout the Federation.  You do so through your annual luncheons, scholarship galas and honours programmes, as well as several other regular charitable and fundraising events.  What’s more, a number of on-island charitable organizations receive a portion of profits coming out of each and every ANSAR.

Your association members’ deep love of country and dedication to nation building continue to redound to the benefit of our beloved Federation, and my highest commendations go to all of you.

The Government and people of St. Kitts and Nevis very much appreciate your ongoing investment and interest in our beautiful country, and we look forward to your continued partnership as we strive to make it the best managed and the best organized state in the world.

That’s why today we are here and have organized a Cabinet Panel and Open Forum.

We have tapped into the considerable resources and expertise of participants in the Diaspora – who are making great strides in academia, government and the private sector throughout North America, the United Kingdom, the United Arab Emirates and other parts of the world – to plan this historic gathering.

My Government intends for the Conference and Expo to, inter alia, heighten awareness of investment opportunities, and also lead to the establishment of a database of Diaspora expertise and an approved Diaspora Policy that will provide a legislative and regulatory framework to facilitate Diaspora investments.

Looking ahead, my Government will consider economic incentives to stimulate more diaspora philanthropy, particularly directed at organizations and institutions focused inter alia on early childhood and adolescent development such as the St. Christopher Children’s Home.

The Government will also consider whether we should raise financing from our overseas nationals by issuing diaspora bonds – which both India and Israel have had much success with and which development economists such as Dilip Ratha of the World Bank are proponents of – to fund infrastructure projects and social investments.

The Government is also actively considering offering tax incentives and duty-free concessions for Kittitians and Nevisians coming back home to engage in agriculture, real estate development and other key activities.

We are making this appeal today: give us your projects wrapped with love!  My Government is ready to throw its vigorous support behind diaspora entrepreneurs.  We encourage you to identify market opportunities and create and invest in new projects that will spur further economic and job growth in your beloved homeland.

Indeed, my Government is serious about economic growth and jobs.  The first three years of my Team Unity administration have set impressive records, witnessing the highest annual Wage Bill, the most Business Licenses issued in a year, and the largest numbers of Jobs, Workers and Social Security Contributors.

Whether it is to achieve entrepreneurship, property ownership or wealth – whatever our people’s hopes and aspirations – we are making things happen for all!  My Government is opening doors and creating opportunities through service and empowerment, and today we extend a hand to you in the diaspora so that we can work together, Building Partnerships Towards Sustainable Development.

It is therefore my great honour and privilege to officially open the first Diaspora Conference in our beloved St. Kitts and Nevis.