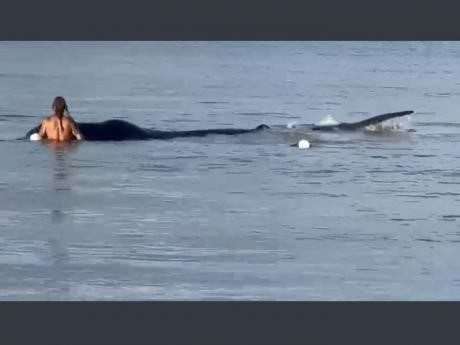 A sperm whale that was beached in shallow waters in Negril, Jamaica this morning has been freed and is back in open water, according to a Jamaica’s National Environment and Planning Agency (NEPA).

NEPA said in a release this afternoon that the whale, which was seen close to the Azul Beach Resort in Negril, was guided back out to sea by channels in the local reef.

The organization said it collaborated with several stakeholder groups to free the whale, including the Jamaica Defence Force Coast Guard, the Jamaica Society for the Prevention of Cruelty to Animals, the Negril Area Environmental Protection Trust, veterinary experts from Dolphin Cove, and local water sport operators from Stanley’s Sea Sports.

The situation of the animal emerged after a video was shared on social media this morning showing an unidentified swimmer attempting to assist the whale, which was floundering in the water.

It is believed that the whale may have become lost during the storm on Saturday night, which led it to venture into the shallow waters where it became trapped.

NEPA, an executive agency of the Ministry of Economic Growth and Job Creation, is the principal governing body responsible for environmental protection, natural resource management, land use, and spatial planning in Jamaica.