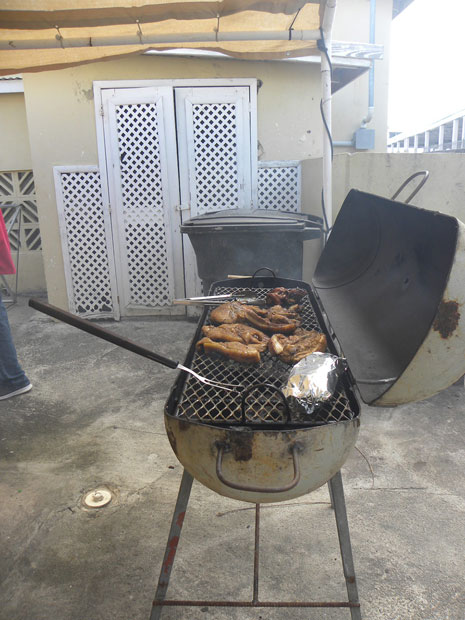 The aroma of fresh-cooked pork dishes and many varieties of pork products were displayed during the island’s first Pork Festival held Friday (May 27) at the Charlestown Public Market. The festival opened at 9 a.m. and closed at 6 p.m.

The Department of Agriculture sponsored the event during Agriculture Awareness Month as part of an ongoing effort to minimize an oversupply of pork on the island. This year the event’s theme was “Adapting to Climate Change to Achieve Greater Food Security.”

Permanent Secretary of Agriculture Eric Evenly told the Observer the event was planned to let Nevisians know there is an oversupply of pork on Nevis.

“Due to the oversupply of pork we decided to have a pork festival,” Eric Evenly, said. “The goal of this event was to sell pork and pork products we have produce at the Abattoir.

“The Department of Agriculture does not raise pigs, but we have a number of livestock farmers on the island that raise them,” Evenly said. “People are surprised to hear we have an oversupply of pork because Nevisians love pork, pork is consumed widely and many livestock farmers have decided to produce pork.”

Evelyn noted, “Although there is an oversupply of pork, some supermarkets still import a small percentage of pork. Imported pork is still being sold in the supermarket but the Department of Agriculture is trying to push ‘buy local eat local.’ Products produced on the island is of superior quality compared to what we get overseas.”

P.S. Evelyn pointed out that a similar initiative was undertaken serval years ago with beef.

“We had a beef festival, because we had an oversupply of beef and because of that initiative there is not enough beef on the island now. So we wondering if we would see the same thing with pork,” P.S. Evelyn commented.

Evelyn thanked everyone for the support of this first-time initiative and noted the Pork Festival the event might be held again next year.