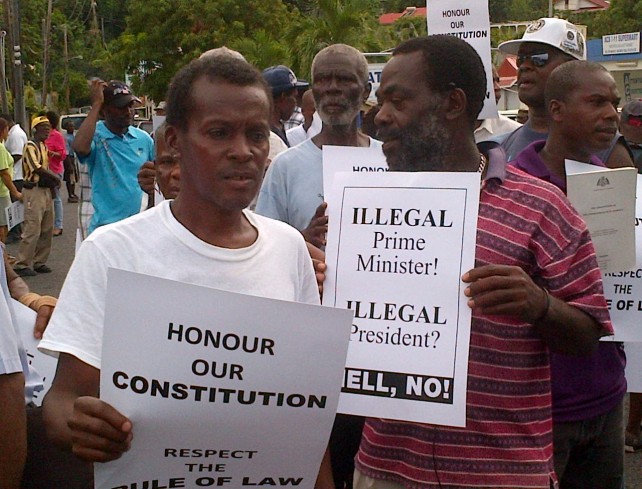 And the Governments of Canada and the US have issued Dominica travel advisories in response to civil unrest in Dominica ahead of Friday’s general election.

Two persons were shot and injured by the police Thursday morning in the village of Salisbury during attempts to quell demonstrations by some of the residents.

“All cruise ship calls to Dominica have been cancelled effectively immediately and that cessation of services shall remain in effect until after the general election period, when hopefully this madness would have subsided and we would have brought to an end this unwarranted blotch on our otherwise pristine record of peace, safety and tranquillity,” Skerrit said in a radio broadcast on Wednesday night.

Skerrit said also that the elections will take place as scheduled today, and hinted that the police and other law enforcement officials were adopting a stronger stance against those persons blocking roads and burning tyres and debris.

“Let us be clear also that the intimidation of voters and other law-abiding citizens in this country will stop in the prelude to voting. I will not have lawless persons attempt to frustrate decent voters on the way to the polls or destroy the democratic process in Dominica.

“Law enforcement officials have exercised as much restraint as is humanely possible. They have endured verbal abuse, physical abuse, threats of violence, injury and even threats of death. Many law-abiding citizens have been harassed,” Skerrit said, making reference to the various incidents posted on social media, including the verbal abuse of the Bishop of Roseau, Gabriel Malzaire and Cardinal Kelvin Felix earlier this week.

The roadblocks and fiery demonstrations are confined mainly to the northern villages of Marigot and Salisbury, considered the strongholds of the Opposition party and Skerrit said what was revealing is that in the incident involving the head of the Roman Catholic Church, the brother of the UWP leader, Lennox Linton, was “seen clearly on video”.

He said getting to the Douglas Charles Airport via the main road in Marigot was akin to walking the gauntlet and that the Bishop and other travellers “had to physically carry their suitcases along the streets, pass burning debris…as they endured the abuse of the supporters of the Opposition leader.”

The Roman Catholic church has since issued a statement condemning the verbal abuse of the two senior members of the church, saying it considers the incident to be “an act of disgrace and disrespect not only to head of the Catholic Church in Dominica but to the clergy and the lay faithful as well”. (See Page 27)

Skerrit told the nation that he was disappointed that no apology has been forthcoming from Linton or the UWP to the Roman Catholic church on the abuse.

“It is clear that the leader of the Opposition, Mr Lennox Linton does not have it in him or what it takes for him to publicly apologise to His Lordship for the conduct of his brother and the UWP supporters.”

He said even if Linton does not like the bishop, “He should respect the office of the head of the Catholic church in Dominica. He owes His Lordship, the bishop, an unqualified apology for his brother’s conduct and that of his supporters.”

During the broadcast, Prime Minister Skerrit said the worst fears of the island as a result of the violent acts being circulated on social media as part of the strategy of the Opposition to disrupt the polls had started to materialise with cruise ships removing Dominica from their weekly calls.

“We have worked too hard, done too much and come too far to build a solid positive national reputation to have it destroyed by this lawless bunch,” Skerrit said, noting that on Wednesday, a cruise ship with more than 1, 400 passengers refused to dock here for fear of its passengers being affected by the violence.

He told the nation the decision of the cruise ship meant that many other stakeholders, including taxi drivers, tour operators and vendors have been affected and that the decision of other cruise lines to cancel stops here were very unfortunate.

He said the authorities here had been receiving calls from cruise line operators “querying the safety of their passengers and that the actions of the Opposition and their supporters were impacting negatively on the image of Dominica and ordinary Dominicans.

Ironically, this chaos and violence comes as Dominica was being  named as a top destination for travellers in 2020 by leading travel publication Condé Nast Traveller.