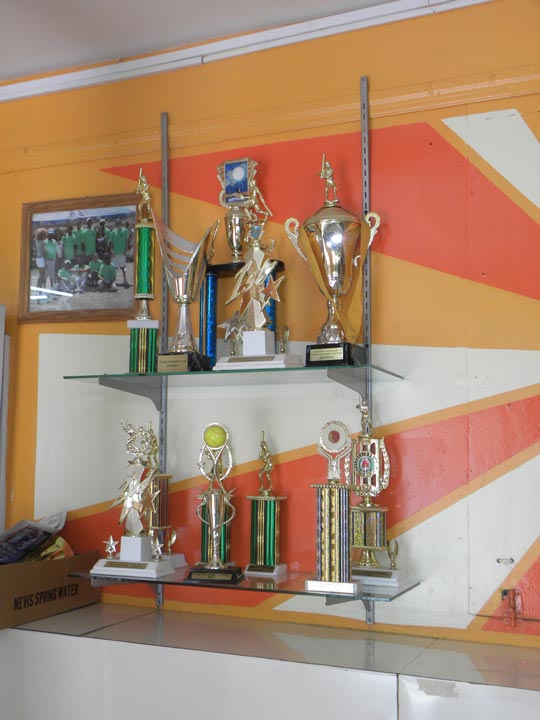 The Spanish community in St. Kitts and Nevis opened the 2016 softball season with six teams competing for the annual Dominican Republic Mother’s Day Softball Cup. The tournament kicked off on April 17 with a morning parade through Charlestown, which began near Superfoods Supermarket and finished at the Villa Grounds. The second round of competition continues with a tournament April 24 at 10 a.m. at the Villa Grounds in Charlestown.

“For five weeks the teams play against each other,” Chamaco Calderon, Softball Association president told the Observer. “Three teams’ play in Nevis and three teams play at the same time in St Kitts.”

Calderon said the competition also acts as a fund-raising activity. Spectators do not pay admission to the competitions, but money collected from the bar is used to fund injured players.

Calderon pointed out that softball and baseball are important to the Dominican Republic’s culture.

“In Santa Domingo we play baseball all the time, it is very important to us,” Calderon said. “Every year many Santa Domingo players, some as young as 16, are recruited to join major baseball teams in the states (United States). So baseball gives us many opportunities to make a great life for ourselves and our families.”

According to Calderon the softball league began in the Federation because there wasn’t much to do on Sunday.

“It was very boring, so Spanish nationals decided to play softball on all the holidays on which the sport is played in Santo Domingo,” Calderon explained. “That was five years ago and now the tournaments are a big event Spanish look forward to on the island.”

Calderon said the lack of equipment and a playing field make it difficult to play baseball.

“Our main goal is to begin baseball but we do not have the right equipment,” Calderon said. “Baseball requires a lot of protective gear and a much bigger field compared to softball.”

Before a baseball league can be started, Calderon needs to get supporters and approach sponsors to get the league off the ground. The league has received help in Nevis from Mrs. Hazel Brady-Williams, the Junior Minister responsible for Sports.

Calderon pointed out that Federation softball teams have travelled to different islands to compete in regional events. His team will travel to Monserrat in a couple of months for a softball competition.