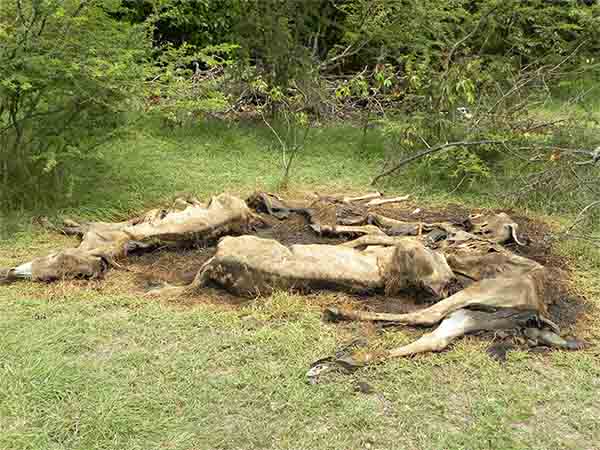 By Monique Washington and the Observer’s intern, Zoe Bendeito

The impact of the large donkey population has not only impacted farmers and residents, but also hotels on the island.

Recently, Carlisle Powell, a senator in the Nevis Island Administration, reportedly accused the Ministry of Agriculture of slaughtering donkeys on the island and disposing of their carcasses in inhumane ways. The Observer has substantiated part of his claims by witnessing donkey decomposing carcasses in various vacant lots on the island, however, there was no indication of who did the slaughtering.

The Observer spoke with the owner of the Hermitage Inn, Richard Lupinacci, on Thursday. He revealed the impact the donkey problem is having at his hotel.

“Guests complain at night when [the donkeys] break into the hotel yard, and the snorting and running up and down next to the guest rooms,” Lupinacci said. “We try to keep nice landscaping, but when donkeys break in, they rip up all the nice landscaping.”

Lupinacci noted that the problems the donkeys have caused did not happen overnight, but have been a problem for more than 20 years, and if the donkey population continues to grow, it will not be viable to the people and island of Nevis.

“We have donkeys in the number of thousands,” he said. “Not dozens. Not hundreds, but thousands. There are well over 2,000 on the island now. Two donkeys require one acre of land per year. We don’t have the facilities to support the donkey population like that, which is why they are such a problem.”

Lupinacci has claimed that he previously tried to get the government to do something about the increasing donkey population, but NIA hasn’t paid much attention. He said that he agrees with the culling of the animals, if done in a humane way.

When questioned about other methods of dealing with the donkey population, he gave other options, but reasons why they might not work. “Exporting them is one option,” he said, “but we can’t because they carry diseases. Starting a donkey sanctuary requires thousands of acres and we don’t have that. We don’t have the facilities to support the donkey population like that, which is why they are such a problem.”

Lupinacci claims that he became very concerned with the donkey situation when people began discussing it in the international press.

“I was concerned when some well-intention ex-pats picked up this (donkey culling) and started running to the international press saying this is a cruel, horrible island [that is] killing donkeys [for no reason]; that was wrong,” he said.

The Observer notes that recently the disposal of the animal carcasses has appeared not to be has public and careless as in past.