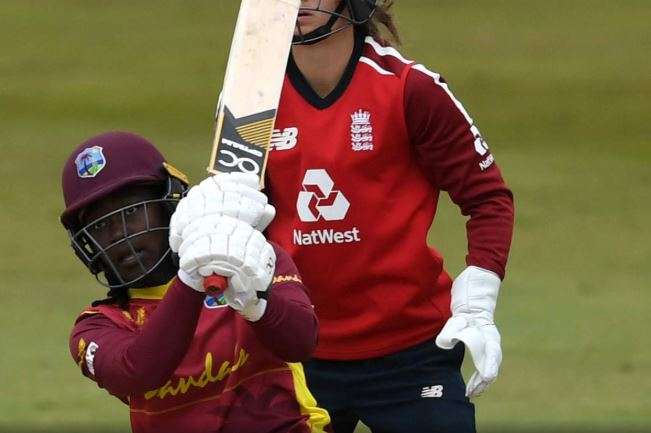 DERBY, England–England ladies won again yesterday at Derby to put the home team 3-0 up in the 5-match series and seal the series.

The first women’s match to be shown on free-to-air television in England since the 1993 World Cup final culminated in the home side winning by 20 runs, after posting 154 for six – sealing a series win with two matches to play.

England batted first and came out all-guns-blazing and Nat Sciver blasted 82 from 61 balls, her highest score in the format, including 17 off the penultimate over of England’s innings.

In a week in which most households been have turning on the heating for the first time this year, it was no day to be fielder at Derby, where cold hands meant dropped catches.

West Indies gave England a scare early on, leaving them reeling at 13 for two in the third over and able to muster only 33-2 across the first six overs.

West Indies looked to be on top, but then along came Sciver, who shared half-century partnerships with Heather Knight (29) and Fran Wilson (16no), before a spell of big-hitting at the end allowed England to add 38 runs from the last three overs. That included the only six of the innings, lofted over long-on.

West Indies looked on course for the first 10 overs of their chase, with Deandra Dottin and Hayley Matthews adding 48 for the third wicket, but when leg spinner Sarah Glenn trapped Matthews LBW in the 13th over , it sparked a mini-collapse.

Dottin, who top scored again, eventually holed out in the deep four overs later against Katherine Brunt, after pounding 63 from 56 balls, and as it turned out, her departure marked the end of the Windies challenge.

Still, when it came to the last three overs, with five wickets standing West Indies needed 42 runs, and were in with a squeak. Now and was the time to go for it in a do-or-die final bash.

England had scored 38 from their last three overs, but the West Indies challenge quickly petered out, and Windies skipper Taylor, batting at number six, made just 14 not out from 13 balls, as West Indies inexplicably ended up with five wickets still standing, but 20 runs short of the target.

It had all looked so good for Windies for a while, but, again, it wasn’t to be.