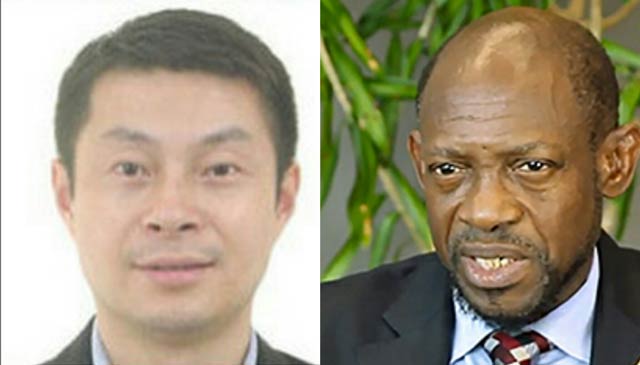 Basseterre, St. Kitts – Former Prime Minister of St. Kitts and Nevis Dr.Denzil Douglas has agreed with Prime Minister Timothy Harris that due process is required in relation to Ren Biao, who is wanted by Chinese authorities and Interpol for allegedly stealing up to US$100 million in China.

Biao, who is currently a resident in St. Kitts and Nevis, has dominated the news cycle in recent weeks with Harris’ administration stating that the individuals who are at the centre of the matter have to be afforded due process that conform with the laws of St. Kitts and Nevis and that there is no basis for extraditing St. Kitts and Nevis citizens in that way.

“Our country is no stranger to extradition requests,’ Harris said. “We well remember the judicial processes that attended the extradition requests of Charles ‘Little Nut’ Miller and Noel ‘Zambo’ Heath, to name but two. Despite the serious allegations of criminality against these two citizens of St. Kitts and Nevis, the Denzil Douglas-led government of the day afforded those gentlemen due process as guaranteed to them under the laws of St. Kitts and Nevis.”

Harris added that the country cannot allow the sovereign laws to be trodden upon by any nation attempting to engage in taking any citizen from St. Kitts and Nevis.

In a radio broadcast on the matter last week, Douglas agreed that due process must be given to every citizen of St. Kitts and Nevis.

“So that is what I’m saying,” he said. “Why, even though China is this big country and we don’t have diplomatic relationship with China and even though we are small, that does not mean that we will not defend our people, so there is due process. [However,] the due process must also involve a certain step, [an] engagement, and the attorney general is not a part of that due process. It is the court of our country that must determine whether he goes or not.”

Douglas added that at the time Biao received citizenship, there were no red flags to suggest that the individual had done anything wrong.

“Nothing at all came up to indicate that the economic citizen had done anything wrong at the time when he was making the application for citizenship for St. Kitts and Nevis and [he] was subsequently allowed to have the citizenship,” Douglas said.

He also stated he was unaware of any contact by Interpol, which does not usually make contacts with governments. Though Interpol had contacted the Labour government back in 2014, “Dr. Harris is very misleading again on this matter to the general public. Interpol does not inform governments; Interpol is an international police organization that speaks to police at the national level,” Douglas said.

Douglas added that there had been no need for the Office of the Prime Minister to be in dialogue with that organisation. “In each country at the national level that is a member of Interpol, there is a designated senior police officer who has been trained and who therefore interacts with Interpol whenever there is a case so to do,” he said.

The now opposition leader also noted that China has been a market for investment into St. Kitts and Nevis over the years and has made palpable contribution through their role in the Caribbean Development Bank (CDB).

“The Pogson Hospital [was] built by China because of China’s contribution within the relevant agency in the CDB in order to foster social development in our countries,” he said. “In Nevis, I think there is a school that was built with the assistance of the Chinese.”

Also commenting on the issue was political consultant and Director of Caribbean Development Research Services (CADRES) Peter Wickham, who in an interview with SKNnewsline stated that he would give the government “full marks” for how they handled the matter.

“You can’t just give someone over to the authorities, not once the person carries citizenship,” he said. “I think if they did that, you would be making a whole mockery of the whole concept of economic citizenship.”

He also commended the government for how they made information available to the public.

“Dr. Harris has done the best that he can in terms of explaining how the government has gone about the situation in the first place,” Wickham said, “and [in] explaining to the public the way these things work.”

Wickham added that he does not believe that citizens should be handed over without being given due process.

“I don’t support this idea that an individual can just be handed over,” he said. “We’ve had cases in the past where notorious drug lords have been sought and extradition proceedings have been implemented and I think that is the international standard St. Kitts and Nevis would want to be judged by.”