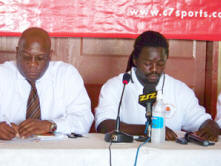 (Molineux Site, St. Kitts) – The Dr. Timothy Harris Sponsored Inner City Basketball League is set to take off on Saturday, June 21 at 5:30 pm, at the Molineux Hard Court. The league will run from June21-August 23.

This was revealed at a press conference held at the Edgar Gilbert Sporting Complex in Molineux on June 17, by League Commissioner Crace Lewis.

According to Mr. Lewis, the League is in its fifth year. The Inner City Basketball League was the brainchild of Samuel “Poui” Caines and Mr. Lewis, who, in 2004, received the support from Dr. Harris to establish and organize a basketball league to give youngsters an opportunity to play at the community level. It is hoped that those playing in this league will one day move on to play at the national level.

The League started in 2004 with four teams. This year’s league boasts of having ten teams.

“This is a significant mobilization of young people into productive activity in helping them to build their skills of learning to live together, develop camaraderie and friendship which are so critical for the peace and well-being of our respective communities,” Dr. Harris said in speaking of this remarkable achievement.

According to Mr. Lewis, the primary goals of the league have been to create an exciting atmosphere within the community through competitive basketball throughout the summer; to build community togetherness by bringing families and friends out as supporters, and offering a chance to see first class basketball at its finest; to give the players a chance to play competitive basketball who are unable to play in SKABA and to build goodwill, team spirit and fair play between and among teams and participating communities.

In speaking of the attainment of the primary goals, Dr. Harris said that he was generally pleased.

“We believe that over the last five years, this league has done its part in building team spirit among the young, building camaraderie across distinct communities and has mobilized communities for weeks at end in support of a highly competitive sport. It is to the credit of the young men and the young ladies who have supported them over the last five years that we have not had one occasion of violence,” Dr Harris said.

Young Guns are the reigning champions. Information concerning the league can be accessed by the website:  www.c7sports.com.