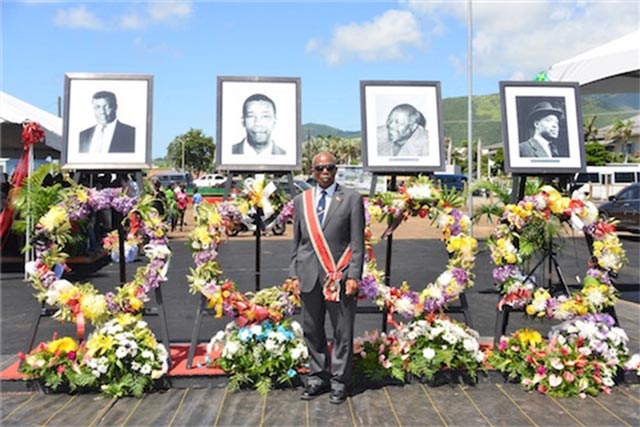 Simmonds spoke at the National Heroes Park, where the contributions of all the federation’s national heroes had been celebrated. He stated that he was happy for the opportunity to have a conversation with the youth of the nation.

He also thanked the government and the people of St. Kitts and Nevis for the signal honour bestowed on him while he is still alive. “I thank God for life every moment of the day,” he said.

Dr. Simmonds noted that doing well in school and becoming a medical doctor and helping people recover from illness would not have beeen enough to see him being named a national hero.

“Even though I worked and studied at one of the best hospitals in the United States, Allegheny General Hospital, and became a member of the Heart Transplant Team under the leadership of renowned heart surgeon Dr. George Magovern, that would not make it happen,” he said, adding that doing well in school and helping others can vault you toward being considered a “hero.”

“When you achieve success remember to build a better life for your parents and guardians who sacrificed much and deprived themselves so that you can make it,” he said. “Learning in school, striving to be the best you can be, is the foundation on which you can build the rest of your life.”

He then gave some advice as to how one can achieve their goals starting with success in school.

“One, every day, pay careful attention to the teacher in class, and try to understand what you are being taught,” he suggested. “If you do not understand, say so. Two, assuming that you are going straight home from school, when you get there do not open a school book at that time. Go outside and play. Go jogging, practice football, cricket, basketball or netball, or tennis. This applies to boys and girls. Devote 1-  1½ hours to exercise. This is not book advice, this is how I lived every school day. You can do it too. The habit of exercise is essential for your health now and for the rest of your life. Three, later that evening, every day without fail, go over what you learnt that day. It might be easy and straightforward, but if you have to, wrestle with it like a dog with a bone, and don’t give up until you know and understand what you were taught that day. Four, in addition be sure to complete any homework assignment before you go to bed.”

He added that it was important to get priorities in order: “You notice something?” he asked the crowd. “No time for Xbox or TV yet… You have to get your priorities in order. I know you are going to tell me that things have changed from my time. That’s true. We didn’t have Xbox, or iPad  or TV; some of us didn’t even have radio. Yes, things have changed. You, the young people of today, face greater challenges and distractions than we ever faced.”

Dr Simonds also implored the youth to not react or respond to peer pressure that drags them into the morass of crime and violence.

He then hailed those who have being following a positive path especially through education.

“The good news is that it is happening slowly, but surely,” he said. “I felt privileged when I was introduced to some young students who had made a robot and earned recognition in an international competition for their work. Made a robot…in St.Kitts? That is the kind of peer pressure we need.”

The natioanl hero then challenged young people to delve deeply into the world of science and technology, finance, languages and trades.

“Some people like to spread the falsehood that if you good at working with your hands, you don’t need much book learning,” he warned. “For them to be a mechanic, you just have to put on some dirty overalls and tamper, and you may eventually have a workplace [that] becomes a graveyard for vehicles.

“The mechanic who has a sound basic education and learns the science of his craft and continues to update his knowledge is the one who will sell cars, repair cars successfully, sell parts and employ others. The mason who is just satisfied to run blocks and use his trowel expertly may be employed by the one who learns to read plans, build a house or even become an architect and design not just a house, but a whole community. In this day and age, any field you choose to enter will require you to have a good basic education and a desire to continue to learn more about your chosen field. To make it in this computerized and rapidly changing world, you must love to learn, for the need for knowledge never ends.”

The former prime minister then reminded students that education can be an eqaulzer with both the rich and the poor having access to it.

“The poor man’s child or the rich man’s child can rise to the top of the class,” he said. He then gave insight into how he grew up.

“I was born and raised in Rosemary Lane; it was a dirt road and we used to play cricket and football in the street,” he said. “We never lacked for balls because we had a breadfruit tree. We played barefooted; I used to sleep on the floor on lodgings for years until I graduated to sleep on the bed with my grandmother.”

He also spoke of the times he had to bare the brunt of hunger during his school days. “I wonder if any of you know what it is to be really hungry? Perhaps not, not with our school feeding program in place. I am not talking about the ‘I had breakfast and as lunchtime is approaching I  begin to feel a little hungry kind of hungry.’ I mean the ‘I have not had enough to eat for the whole day and the piece of bread and the bush tea I had tonight ain’t pick me teeth’ kind of hungry.”

He then spoke of some of his biggest fears he had to contend with while growing up.

“I was 6-7 years old and I used to fraid darkness and cockroach and spider,” he said. “We used to call them donkey spiders. Our house was up on ‘nogs’ with a cellar underneath. There was a back stairs to the house with a little landing at the top. I was living with my aunt and grandmother. This particular night I was hungry, and there would be no more bread in the house until Mrs. Hawley’s shop open in the morning. I was so hungr,y I started to cry, and I told my aunt ‘I hungry.’  She said to me ‘all I have in the house is some rice and butter, but I not going back downstairs. I will cook some rice with the butter for you, but you have to go downstairs and bring up the coal pot, the coals and the pot.’ Hunger was greater than fear, so I took the hurricane lamp and went down under the steps. The roaches and the spiders started to run all over the place, and I had to make two trips.”

Dr. Simmonds then implored the youth of the federation to learn from his story and reach heights similar to what he has achieved in the future. “From being poor, hungry and afraid, I am here today before you – a living national hero,” he said. “The simple lesson is this: If from that, I can reach where I am today, so can you and you and you. Learn and serve!”