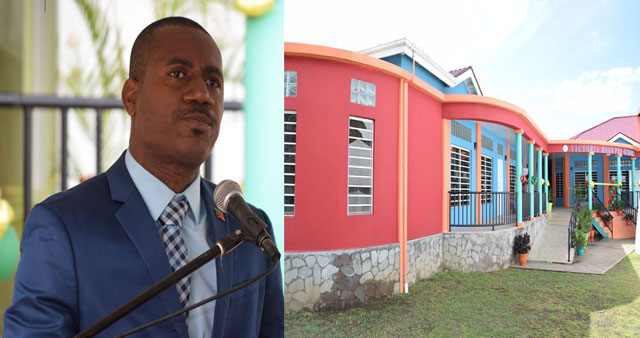 Basseterre, St. Kitts, March 07, 2017 (SKNIS): The Government of National Unity has continued to invest in early childhood education as it plays a vital role in a child’s development, says Deputy Prime Minister and Minister of Education, Honourable Shawn Richards.

At a ceremony to mark the official opening of the Victoria Road Preschool, the minister said that the government is committed to its goal to have 100 percent of the federation’s children engaged in early childhood development.

“As a matter of fact, it is because of this why the government took a decision very recently to ensure that for each child, whether at a public or private centre, that the government pays a subvention of $25 towards the cost of attendance of each child,” said Minister Richards. “So, if your child is at a private center and the cost is $50, the government subsidizes to the extent of $25 for your child. That is a significant investment.”

The education minister said that before the Government of National Unity came into office, they held fast to the belief that the country’s most important resource is its people.

“We have to continue to invest in our people. We have determined that just as primary school and secondary school education are free of cost, so too, as much as possible, must be early childhood education, especially at that stage when your child needs the help most,” said Minister Richards.

The education minister mentioned that the United Nations International Children’s Emergency Fund (UNICEF) has said that the Early Childhood Development Unit in St. Kitts and Nevis is one that should be emulated across the Caribbean.

He said that, in particular, UNICEF made mention of the High Scope Programme, which is the education programme utilized in the federation. UNICEF said that St. Kitts and Nevis has made significant strides not only in implementing the programme, but also in ensuring that the country has trained its teachers to deliver the programme.

“That for me is significant from the point of view that it says to parents that we are not only just placing teachers within the classrooms, but we are ensuring that they are properly trained to teach your children,” said the minister.

Minister Richards said that there was a time where persons would be able to acquire a job to teach early childhood education with little or no qualifications, but times have changed.

“The same standards, the same qualifications, that are required for primary school teachers, we are now requiring the very same standards for persons teaching in early childhood,” he said.

The minister said that parents can rest assured that students attending the Victoria Road Preschool will be receiving high quality education.

Minister Richards said that teachers should always remember that they are there to serve the children and instill knowledge that they would not depart from. He said that while it is good to receive accolades for their work, it will be equally worthwhile when children under their care are able to say that their teacher or teachers have positively impacted their lives.

“That for you must be your primary concern,” he said. “I have seen in far too many cases where teachers have lost sight of the fact that they are here to serve children, especially children at this age.”