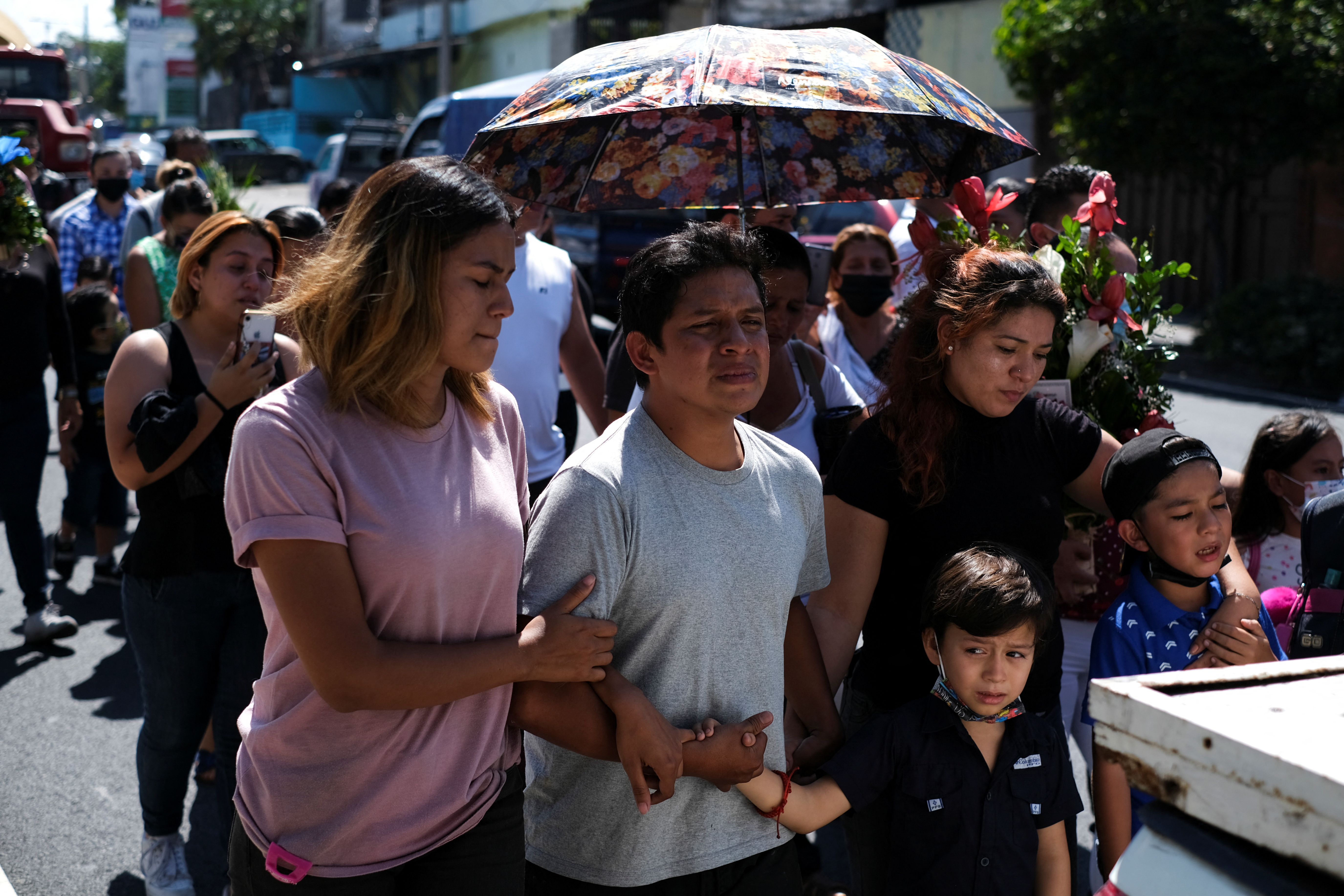 Juan Carlos Galeas walks at the funeral procession for his brother William, who was detained mid-April and sent to La Esperanza prison until authorities handed over William’s dead body to the family in mid-May, in San Salvador, El Salvador, May 13, 2022. Picture taken May 13, 2022. REUTERS/Jose Cabezas

SAN SALVADOR, May 16 (Reuters) – Dozens of innocent people have been apprehended in El Salvador in recent months amid President Nayib Bukele’s “war on gangs,” after superiors forced officers to meet daily arrest quotas during a state of emergency, five officials told Reuters.

In March, El Salvador registered 62 murders in a single day, the bloodiest since the end of the country’s civil war in 1992. In response, the Legislative Assembly dominated by Bukele’s right-leaning populist party declared a state of emergency, suspending citizens’ constitutional rights. In the past month and a half, more than 25,000 people have been arrested.

“We have received some 40-45 complaints from [officers in] different areas of the country where officials demand specific quotas of people to be detained,” said Marvin Reyes, General Secretary of the Police Workers Movement Union. “In some places they impose six (captures) a day, in others five, in others three.”

In response to a request for comment, a police spokesperson denied the use of quotas and said such an order is considered a serious offense and urged staff to report it.

Security forces have been deployed in areas considered high-risk, rounding up suspected gang members, sometimes just for having tattoos, according to three police and two military sources who requested anonymity to share the information.

Since he took office as president in June 2019, Bukele has made the fight against crime and violence a banner issue.

Then in March, violence suddenly increased and a state of emergency was declared.

Even as his law and order tactics enjoy broad popularity, the arrests of innocents and reports of assaults underscore the flaws of Bukele’s newest approach.

Rights groups, including Human Rights Watch (HRW) along with the Central American organization Cristosal, have received more than 200 complaints during the state of emergency, including 160 arrests they described as “arbitrary.”

Bukele has defended the operations but added that “1%” of those captured could be innocent, and that if found to be true “must be corrected.”

“In such a large operation, there will always be mistakes to correct,” he wrote on Twitter April 9. The presidency declined to comment for this story.

In one incident, on the morning of April 18, two Salvadoran policemen and four soldiers arrived at the home of Cristian Machado, an intellectually disabled 18-year-old, and took him away, handcuffed, in the back of a pickup, on accusations he was a gang member. Machado’s brother and a neighbor were also arrested.

Machado was released after four days. His older brother, Manuel, a 27-year-old father of two, and his neighbor were released on May 5 after 18 days behind bars, during which time their families did not know their whereabouts.

“The guards hit you, with the sheer force of a blow they want you to admit that you belong to a criminal organization,” Manuel said, adding that he had to share a cell with some 150 people. Of those, 20 confessed to being gang members.

Reuters learned of three other cases similar to Machado’s, where uniformed officers detained people with no known gang ties and no criminal record and then released them after arrest. The police declined to comment about the four specific cases reported by Reuters.

Based on what officers say is an old statistic of 46,000 active gang members in the country, the chiefs apparently divided that number among El Salvador’s 14 departments and began requesting arrest quotas, a Salvadoran police commissioner, who requested anonymity for fear of reprisals, explained to Reuters.

“Many of them [gang members] are no longer here, others have died, others emigrated,” he continued. “We started with an unrealistic number and, therefore, the quotas that were requested are unrealistic,” he added.

The defense ministry did not immediately respond to a request for comment.