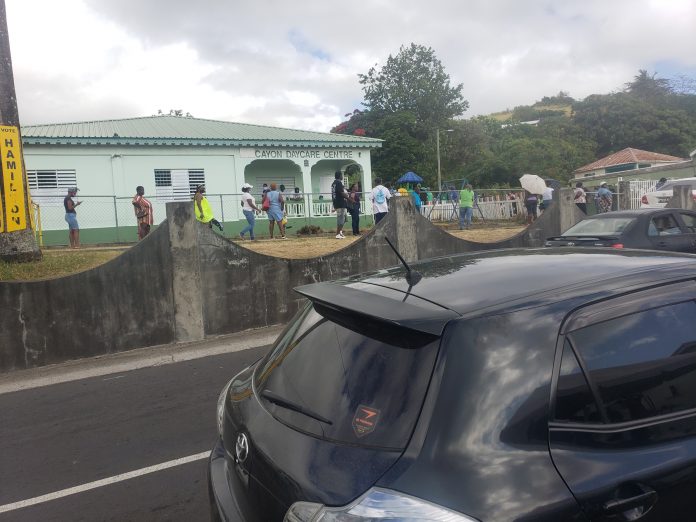 Most of the polls in the Federation are now closed although long lines were still visible across Constituencies 1 and 8. In constituency 1 some polling station will remain open until 7:30 due to a late start to opening the polls. The delivery of the results will begin at 8:00 p.m. Supervisor of Elections will be responsible with alerting the Nation on the results from each polling station across the 11 constituencies

The Supervisor of Elections Elvin Bailey has announced that there were the late opening of the polls at the Kim Collins Athletic Stadium and reassured voters in the area that the time lost will be added on this.

Voters in St. Kitts and Nevis are out in their numbers today for Federal elections.  The polls opened at 7:00 a.m. and voters started gathering at polling stations since before that time.
But many voters have complained about the long waits in lines at the polling stations with some experiencing up to four hour waits in Constituencies 1, 2, 3, 5 and 8.
One female voter described the process as ridiculous and told the Observer even with physical distancing and COVID-19 protocols in place it should not take this long.
In constituency 8 long lines have been observed at the Cayon Day care Center, the Cayon Primary School, the Cayon Church of God and the Anglican Church Hall
Voters have been observing social distancing. Also it is compulsory for all voters to wear face masks while in line and those who dont have will be provided with by an electoral official or the police.
Thus far in Cayon everything seems peaceful and in order.
============================================= 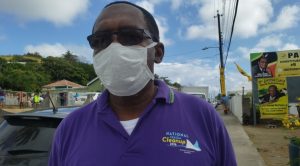 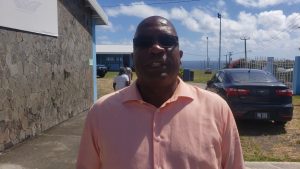 Prime Minister of St. Kitts and Nevis Dr. Timothy Harris interviewed outside a polling station in Tabernacle and he said the people of Constituency 7 have never disappointed him and were bullish on being returned to serve them.

“We are very confident about this election. Constituency 7 has never been a constituency where the outcome is in doubt. It will be Harris again in 7.”

He said he was also confident of Team Unity being returned to office.

“As it relates to the rest of the country we are confident that based on our performance we certainly will have a resounding victory today.”
He said the turn out in the constituency has been “very good” at the polling stations and he was waiting the “very positive results. “
Dr. Harris believed the Team Unity Stronger Safer Future was a  powerful message. “Our promise of a safer future speaks to the fact we will double our efforts to keep our country safe.
“The stronger future is necessary because we need a stronger economy coming out of COVID-19 to put more people to work and find resources to keep services and public infrastructure program.”
In Constituency 6 voters were also out and in line at polling stations.  None candidates were located for interviews.
=================================================

In constituency 5 hundreds have turned out to vote. The Sandy Point Recreation Ground where three polling stations are located features the largest voter turnout witnessed so far. 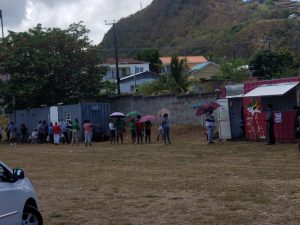 “The feeling is different this time we have the experience. I am very relaxed my campaign is well organized and I am just carrying out my duties of the day.”

Brantley Urges All to Vote

Earlier today Premier of Nevis Mark Brantley, his wife Sharon and their two daughters voted in Cox Village. Brantley later noted that the People of Nevis 9 had been with him since August 2007 and pledged his continued hard work to the constituency.

“I have gone out already and made my mark. I am asking our people to go out and vote overwhelmingly in your numbers. Whoever you chose to vote for exercise your franchise and vote.
“Our forefather suffered long and hard in order for us to have the right to vote, do not take it for grant and do not allow individuals to come and offer you money and bribes you are worth more than that.”
He said that the Team Unity offered the best slate of candidates on offer
- Advertisement -