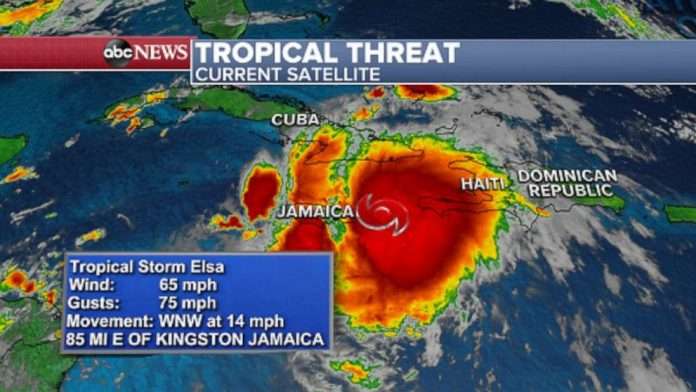 MIAMI (CBSMiami) – As Tropical Storm Elsa gets ready to move across central and western Cuba, tropical storm warnings and watches have been extended along the state’s west coast.

People in Cuba are bracing for the arrival of Elsa which is forecast to bring heavy rain to central parts of the island.

A hurricane warning has been issued for Cienfuegos and Matanzas provinces and residents have been told to beware of flash floods and mudslides.

At least three people have been killed as the storm passed over the Dominican Republic and St Lucia in past days.

The storm’s sustained winds were 65 mph with higher gusts as it moves toward the northwest near 14 mph.

This general motion is expected to continue through Monday, followed by a turn toward the north-northwest on Tuesday.

On the forecast track, Elsa is expected to move across central and western Cuba on Monday and pass near the Florida Keys early Tuesday. Elsa is then forecast to move near or over portions of the west coast of Florida on Tuesday and Wednesday.

Three people in the Caribbean have died as Tropical Storm Elsa makes its way north to Cuba.

The Caribbean Disaster Emergency Management Agency said in a situation report on Saturday that one death was reported in Soufriere, a town in Saint Lucia.

According to The Associated Press, a 15-year-old boy and 75-year-old woman died Saturday in the Dominican Republic.

Elsa strengthened to a category 1 hurricane on Friday, the first of the Atlantic season, while it moved through Barbados and continued moving through the Caribbean.

It was downgraded to a tropical storm on Saturday.

As of 8 p.m. EDT, the center of the storm was moving west-northwest at about 23 miles per hour. Maximum sustained winds remained near 70 miles per hour, according to the National Hurricane Center.

Elsa is forecasted to move near Jamaica and parts of eastern Cuba on Sunday.

Florida Gov. Ron DeSantis (R) has declared a state of emergency ahead of Elsa’s expected landfall.

Officials in the state decided to halt rescue efforts for bodies after the collapse of a residential building in Surfside, Fla., as authorities look to demolish the remaining structure ahead of the impending storm.