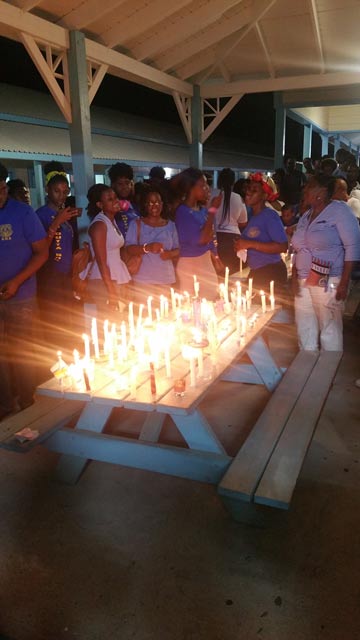 Basseterre St. Kitts – Emotions ran high on Wednesday evening during a candlelight vigil held in memory of Leanna Napoleon, the 17-year-old whose body was found in a shallow grave in Olvees Mountain last week. She had been missing for five weeks since disappearing May 8.

Since the discovery of the body, two young men have been charged with her murder. The first was her brother, 19-year old Brandon Lee Wells, who had been in police custody since the evening of the discovery.

A second person, Travien Liddie, 18, of St. Johnston Village was also arrested. He was charged with murder on Monday. According to police officials, Liddie attempted suicide while in custody and then placed in the hospital’s psychiatric ward for observation.

Police are searching for a third suspect, Ivan “Chinyman” Phillip, who is also expected to be laid with a murder charge.

However, on Wednesday evening at the Basseterre High School grounds, hundreds of individuals turned out to pay respects to Napoleon’s memory in the form of a candle light vigil.

Basseterre High School’s principal, Maurice Benjamin, told those gathered that they were mourning the loss of someone who did not get the opportunity to welcome death and left in the most unnatural way. “Although what happen is still a bit unclear, we do know what happened to Leanna was cruel, and most undeserving,” he said.

He added the school is grieving for Leanna and declared that the reality of the situation is unnerving.

“Her friends, family and indeed the entire nation have been shaken by her death,” he said. “So easily an innocent life can be snuffed out. So easily we can one day be here and the next day gone.”

Benjamin stated that according to the descriptions from her family and teachers, Napoleon was fun loving, free spirited, aspired to achieve her personal goals and did not allow anyone to stop her from so doing.

“Let us too, follow her example and laugh more each day, make fun of ourselves and aspire to greater things,” Benjamin said. “We ought not to ever forget her in our memories.”

The deputy prime minister and minister of education told the gathering that accepting death is difficult when someone who is young and full of life has his or her life taken away in these circumstances.

“In Leanna’s case, it is even further compounded, when one of the accused in her death happens to be a brother, a family member,” he said.

He added that there are many question that will continue to linger in the minds of the general public.

“Question, which perhaps we will never ever find the answers to, [linger],” he said. “However, as we continue to ponder, I do believe that the life of Leanna has many positive lessons for us as individuals and for us as a community.”

He noted that Leanna would have had her own circumstances a few years ago when she lost her mother, but she continued with her education until she reached the stage of doing he CXC exams.

“To the students… I say to you that though circumstances in your life maybe tough, regardless of those circumstances, you can and you must overcome,” he said.

Richards also hailed Leanna’s guardian, who took the responsibility of raising Leanna following the death of her mother.

“It says to us that regardless of the circumstances and how hurt we may feel at this point in time…there are still positive role adult models here in St. Kitts and Nevis,” he said. The education minister implored the audience to look out for all children as one goes about everyday life.

The ceremony also featured a presentation by Leanna’s classmates, who gave a rendition of Wiz Khalifa’s “See you Again,” as well as Infamus’ “As Time Roll On” as they paid respect to their fallen classmate. Also giving a surprise musical presentation was Minister of Health Eugene Hamilton.

At the end of the presentations, a prayer made over the family of Leanna ran concurrently with a brief shower of rain.

Arrangements are currently being made by the family for the thanksgiving service of Leanna Napoleon at the Zion Moravian Church on Monday June 26.