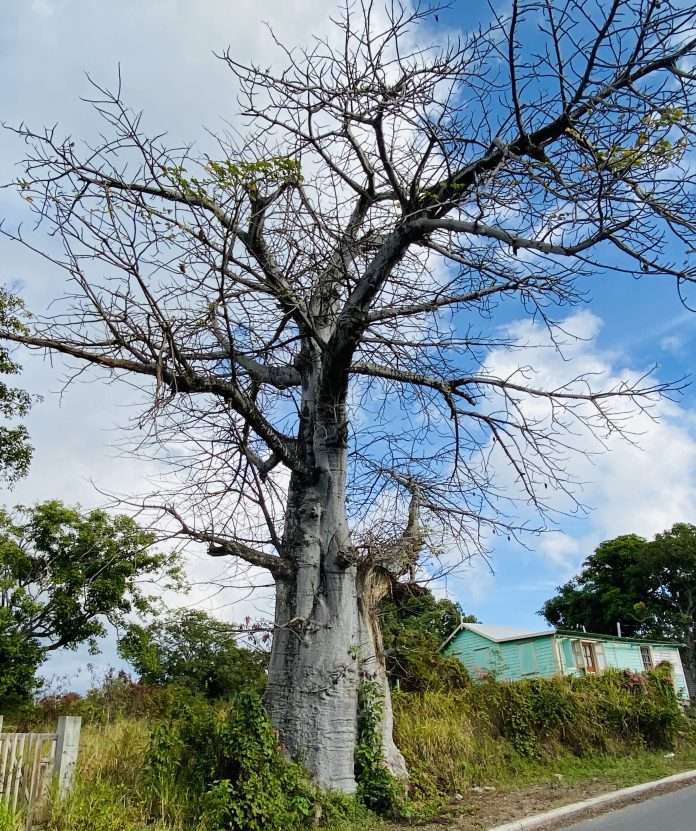 A few years before moving permanently to Nevis, I worked as a pilot in Kenya. Using a classic DC-3 aircraft, our crews would fly tourists from Nairobi to Masai Mara and other nature reserves, where they would stay in safari lodges and go on guided tours to see east Africa’s amazing wildlife.

Our landing areas in the game parks were open fields known as savannas, which meant that, before touching down, we had to overfly them to ensure that there were no elephants, giraffes, zebras, or other animals which would present a danger to both them and ourselves.

For me, gazing down through the cockpit window, one of the most memorable sights was the Baobab tree. With massive trunks and branches spreading to the sky, they were truly majestic, unlike anything else I’d ever seen. In my mind, they would always remind me of the beauty of Africa.

So imagine my amazement when, a few years later,  I was driving along a secondary road in Nevis and saw this:

Could it be? I asked myself.

And so the story begins.

The Baobab tree (Adansonia digitata) is a prehistoric species which predates mankind and the splitting of the continents over 200 million years ago. They grow in 32 African countries and can live up to 5000 years, reach up to almost a hundred feet in height, and up to 164 feet in circumference. During the rainy season, it absorbs and stores water in its enormous trunk, which also enables it to produce a nutrient-rich fruit. Baobab trees can provide shelter, food, and water for both animals and humans, which is why many African savanna communities have made their homes near these trees. In addition, its bark can be turned into rope and clothing. Even its leaves are edible and its seeds can be used to make cosmetic oils. No wonder it’s known as the Tree of Life.

Although never scientifically proven, its origins are believed to be the island of Madagascar (which I also visited, and where I saw hundreds of Baobab trees). In fact, miniature hand carved replicas of the same trees are some of the most popular souvenirs sold to tourists.

But how did they get to the Caribbean?

According to historical records, Baobab seeds were most likely brought to the West Indies by African slaves who considered them sacred and probably planted them to connect themselves spiritually with their ancestral homeland. The first trees mentioned in historical archives were in Barbados around the beginning of the 18th century, which seems logical as the island later became England’s main distribution point for slaves to all of its other Caribbean islands. Today, one of the major landmarks of that sad era is the oldest Baobab tree in the West Indies, located at Queen’s Park in Bridgetown, Barbados.

And there’s really no need to introduce the breadfruit tree. Just about everyone in Nevis has seen it, especially in the island’s higher altitude areas like Gingerland.

Not always known is the fact that the tree was first discovered by Europeans when Captain James Cook arrived in French Polynesia. After he’d brought back samples of some of the plants and their fruit to England, it didn’t take long for the government to decide that breadfruit would be a much cheaper way to feed slaves in its colonies. The mission to transport this new amenity was assigned  to Captain William Bligh of Mutiny on the Bounty fame. Needless to say, it never succeeded. At least, not the first time. Eventually, on Bligh’s second attempt, the breadfruit finally arrived in St Vincent. As in Barbados, St Vincent became the distribution point for the breadfruit tree to all other English possessions in the West Indies.

Norfolk Island, a remote uninhabited Pacific island off the Australian coast, was first settled by English sailors to preempt French occupation. It was hoped that the  discovery of the Norfolk Pine, with its unusually straight trunk and resistance to strong winds, could be used as masts for sailing ships. (It turned out to be unsuitable and the effort was abandoned). However, the Island was soon destined to serve another purpose. It became one of the world’s harshest penal colonies after the British government decided to bring in convicts. According to historic archives, conditions were so brutal that many prisoners chose to commit suicide rather than be sent to a place which was commonly referred to as the Island of No Return. Perhaps ironically, Norfolk Island, after its prison system was closed, was later settled by descendants of the original Bounty mutineers after  the British government decided to relocate them from another of its most isolated possessions in the Pacific Ocean, Pitcairn Island.

Sometimes, just like roots, there are hidden stories just below the surface. This is one of them.