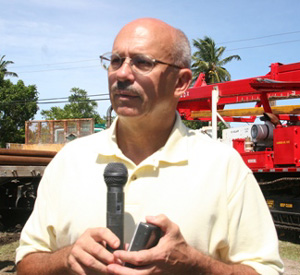 Equipment to begin drilling for additional water on Nevis arrived on the island late last week.  Senior scientist to the project, geologist Dr. Ronald B. Hoag Jr. of Bedrock Exploration and Development Technologies (BEAD) said that drilling would commence this week at the first drill site in the Hamilton Estate area which is at a high elevation.

“We received all the equipment which arrived Thursday and was offloaded Friday and Saturday.  We are currently moving the casings and drill rig up to the first drill site at Hamilton Estate and hope to start drilling in another day or so. We are going to drill the first well up at Hamilton, that’s an area which needs water, it’s on high elevation and we should be done drilling that location in about two weeks,” he said.

The geologist explained that much preparatory work had been done ahead of this stage in the water exploration venture.

“We’ve been doing ground water exploration activities which included mapping the island using satellite imagery and underground surveying where we can actually see down in the earth to about 400 to 600 meters.  We have done over 15 kilometers of geophysical survey throughout the island and we have identified numerous targets that look to be quite favourable,” he said.

Dr. Hoag noted that in the next few months, when a number of wells would be operating, his company would run aquifer tests which involved placing a pump in the well and running it for a period of time to observe the reaction of the aquifer.  The results of the tests will be used to ascertain the water quality and whether it would become a sustainable yield.

Under the BEAD contract with the Nevis Island Administration (NIA), the company is expected to develop one million gallons of ground water per day to compliment the current supply now available to the island.

While he addressed the environmental impact and effects on the existing water supply, Dr. Hoag assured that the new wells would be located away from existing wells. He said part of the exploration programme was to identify target areas where non-oriented water could be located and to estimate the amount of ground water recharge in any particular area.

This the Geologist explained was to ensure that the wells would not draw more than what goes into the ground so there is no possibility of lowering the water table and having salt water intrusion.

“In addition the exploration part of the program, the geophysical survey took a lot longer than expected because it is a very difficult island to find large volumes of water so we had to cover a fairly large area I feel we have some very good targets, we‚ll definitely get water.

“I would say probably within two weeks we will know whether the first well is successful.   each well, so over the next couple of months we‚ll have a very good idea of our success,” he said.

Dr. Hoag assured that the project should be completed or at least, Nevisians would be able to enjoy the first million gallons of water per day by some time in early February 2008.