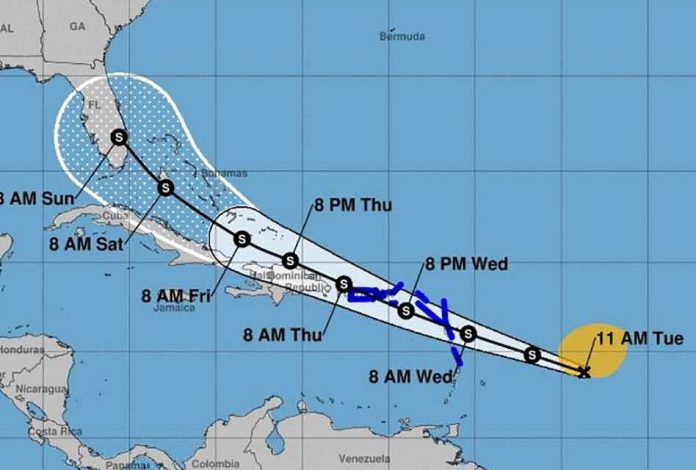 The Federation is preparing for a tropical cyclone that will begin to affect the eastern Caribbean from as early as Wednesday morning.

Tropical Storm Warnings are in effect for the Eastern Caribbean including St. Kitts and Nevis as the tropical cyclone likely to be named Isaias.

Senior Met Officer Elmo Burke said at an emergency press conference that based on the trajectory once they anticipate it will pass to the south of St. Kitts and Nevis

“We are going to be in the northeastern quadrant of the storm, so we anticipate that we are likely to see weather conditions deteriorate starting sometime tomorrow.” The earliest we are anticipating it is early tomorrow morning. The most likely scenario we are looking at about midday or thereabout.”

He said they are anticipating about three to six inches of rainfall. “Some of the models are predicting we can see up to 10 inches. We can see storm-force winds starting tomorrow and into sometime Thursday.  Sees will deteriorate overnight and possible landslides and flash floods may occur during the passage.

He also urged all to avoid the sea and mariners to protect their equipment.

Co-Chair of the disaster mitigation council Senator Wendy Phipps said they had an emergency meeting with members of public and private sector agencies to update on the state of preparedness.

“We received a general state of preparedness and I think to their credit a lot of it had to do with the fact we are already in emergency operations for COVID. As a result of that, we would have seen a bit of infrastructure improvement in terms of National Security infrastructure, Health infrastructure, community centers that will double as shelters, and as a result of that we would be better poised for this hurricane season.”

She admonished all citizens and residents to utilize the media available to receive information.

Phipps also urged workers to remain at home on Wednesday as the dangerous weather may begin when the normal working day begins.

“Look at your communications capability, knowing the telephone numbers for critical agencies…district volunteers for the various districts.”

“Seek assistance from the relevant agencies to take care of these persons. We are asking people who need to move to shelters contact us and use the buddy system and move to the shelter with a family member, neighbor, or close friend.”

He also urged all not to park in waterways and urged those living in low lying areas to safeguard themselves.