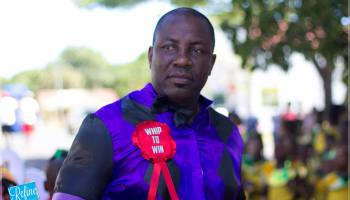 Basseterre, St. Kitts-Popular Facebook blogger Everton ‘Obi’ Elliott, who has following on the social media forum of over 15,000 has had his famous page shut down by the authorities at Facebook.

Elliot, a Nevisian living in the United States has become a name synonymous with posting news updates on varying topics on the local, regional and international scene as well as providing thought provoking content to spark debate amongst his followers and also is an avenue for people in the Federation to anonymously air their grievances without fear of retribution.

However, Elliot will now have to rebuild his base after someone complained to Facebook and got his page to totally shut down.

Elliot then reached out to The Observer in an effort to inform his bloggers what had been the problem as to why his page had disappeared and where they can now find him on the social media website.

“Censorship! Haters colluded with haters at Facebook to disable my previous Everton Elliott aka the BBB account, for what I don’t know.

Elliot added that all the hard work he put in to provide content over the past decade have been now wiped from history, but he however has promised that he will bounce back under his new page Obi Elliot.

“All that depth of informative content of over 10000 pics and posts I build up for 10 years on Facebook gone. My 5000 friends and 10000 followers gone. Just because somebody somewhere and at Facebook hate what I do, but we will rebuild here under my new page Obi Elliott, search this name and add me.”

He however indicated to The Observer that he will also be starting his own blog where he need not to worry about censorship.