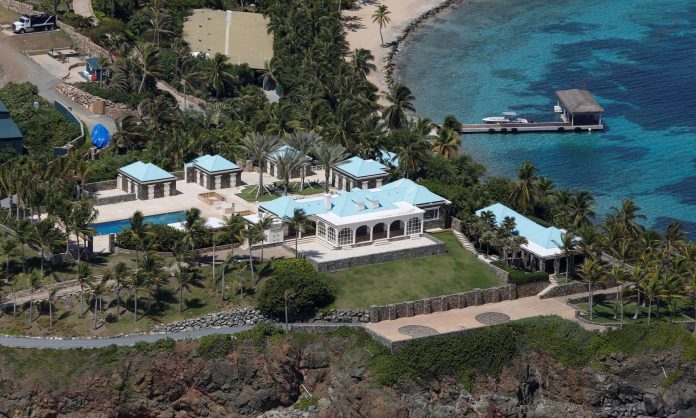 US Virgin Islands- The FBI has raided Jeffrey Epstein’s private island in the Caribbean, in a further sign the death of the financier will not halt scrutiny of his alleged sex trafficking crimes.

Two senior law enforcement officials confirmed to NBC the FBI had begun a search directed by the Epstein taskforce, which is led by the US attorney’s office for the southern district of New York.

Kelly Quinn, who was running a sailing charter in the area, told NBC: “We were just trying to look at pretty fish and swim with turtles and here we are in the middle of an FBI raid. This has been something on our radar for years. We’re all really curious why it’s happening now.”

The raid came two days after the billionaire was found dead in a New York City jail cell, having apparently killed himself. In the aftermath of his death, accusers expressed anger that Epstein would not face them in court. They sought reassurances that authorities would continue investigations into others who might have been involved in a trafficking ring that targeted young girls for sexual abuse.

William Barr, the US attorney general, said on Monday that “any co-conspirators should not rest easy. Victims deserve justice and will get it”.

Geoffrey S Berman, the Manhattan attorney, said in a statement: “To those brave young women who have already come forward and to the many others who have yet to do so, let me reiterate that we remain committed to standing for you, and our investigation of the conduct charged in the indictment – which included a conspiracy count – remains ongoing.”

David Weinstein, a white collar criminal defence lawyer with Hinshaw & Culbertson and former federal prosecutor in Miami, previously told the Guardian Epstein’s death could reduce potential issues with evidence. This could explain the timing of the raid.

“The evidence that they’ve seized from him directly, the only person who can contest the seizure [as unlawful] could be Epstein or somebody who lived with him,” Weinstein said. “Now that he’s dead, he can’t challenge that. All of that becomes fair game.”

Berman’s case against Epstein for alleged sexual abuse of girls as young as 14 includes charges of sex trafficking and sex trafficking conspiracy. The indictment alleges Epstein “worked and conspired with others, including employees and associates who facilitated his conduct” in luring girls to his Manhattan and Palm Beach homes between 2002 and 2005.

The New York Times published an article on Monday in which one of its writers, James B Stewart, recalled an interview he had conducted with Epstein in August last year. Stewart said Epstein had told him he knew details about the supposed sexual proclivities and recreational drug use of a number of rich and famous people.

Epstein was also described as “at ease” when discussing his interest in young women.

“He said that criminalising sex with teenage girls was a cultural aberration and that at times in history it was perfectly acceptable,” Stewart said. “He pointed out that homosexuality had long been considered a crime and was still punishable by death in some parts of the world.”