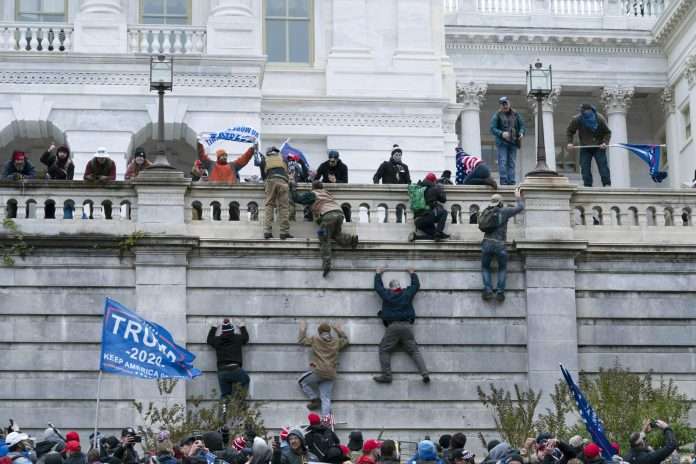 NEW YORK (CBSNewYork) — The FBI is is warning about armed protests at all 50 state capitols, and they could start as early as this week.

The New York and New Jersey state police are working with the FBI to harden security at both state’s capitols ahead of President-elect Joe Biden’s inauguration. In New York City, the NYPD said it will have a robust presence at all locations affiliated with President Donald Trump through Jan. 20.

The FBI is trying to prevent a repeat of last week’s riot at the U.S. Capitol.

In a bulletin sent to law enforcement, the agency warns extremists are calling for the “storming” of federal, state and local courthouses in all 50 states if Trump is removed from office early, along with unspecified threats against Biden, Vice President-elect Kamala Harris and House Speaker Nancy Pelosi, CBS2’s Ali Bauman reported.

“I’m certainly concerned about Albany, whether they may have a problem there, so right now nothing that would affect New York City,” Mayor Bill de Blasio said.

The Wisconsin state capitol is already being boarded up.

MORE: NYPD, FDNY Investigating Whether Any Of Their Members Participated In Storming U.S. Capitol Building

Sund, who has since resigned, told CBS News that during the attack he asked the Pentagon repeatedly to send National Guard troops.

“I needed boots on the ground, immediate assistance right then and there, helping to form police lines to help secure the foundation of the United States Capitol Building. They were more concerned with the optics,” Sund said.

The Pentagon said it did not deny Sund’s request.

Bauman also learned more about the timeline. At around 1 p.m. on Jan. 6, protesters started pushing their way onto the grounds. One hour later, the Capitol was breached. A video shows lawmakers just inside as a man punches through the door.

Vice President Mike Pence was pulled from the Senate chamber, which was locked down by 2:17 p.m.

The FBI has received 40,000 digital tips in its search for all those involved, including one unidentified man waving a Confederate flag.

More than 100 people have already been arrested, such as Adam Johnson of Florida, who is believed to be the man smiling with the House speaker’s lectern, and retired Air Force Lt. Col. Larry Brock of Texas, who is accused of bringing plastic zip ties, which can be used as handcuffs.

Two Capitol Police officers have been suspended for their behavior, like taking a selfie with rioters.

Here in New York City, Police Commissioner Dermot Shea revealed one active member of the NYPD is being investigated for their possible participation.

“Anyone committing crimes, certainly would have a very short shelf life with the NYPD,” Shea said.

The U.S. Army is also investigating one of its psychological operations officers who is believed to have led a group from North Carolina to the U.S. Capitol last week, and sources told CBS News that the FBI has opened at least 25 new domestic terrorism cases, stemming from last week’s siege.