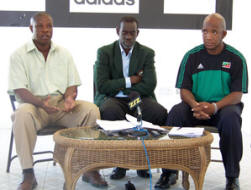 (Basseterre, St. Kitts)- The Federation of St. Kitts and Nevis hosts the National Olympic Qualifying Trials from June 21-22 at the Silver Jubilee Stadium in Bird Rock in Basseterre.

The national athletes who will grace the tracks are competing for a place at the 2008 Olympics in Beijing, China.

Nationals will have the chance to see world champion Kittitian Kim Collins, who won the gold at the 2003 World Championships in Paris, France. He also won gold at the Commonwealth Games in Manchester, England, in 2002.

There are 85 athletes registered to compete at the National Olympic Qualifying Trials, representing seven clubs. Some of the celebrated national athletes who will compete include Virgil Hodge, Allister Clarke, Mertizer Williams and Tiandra Ponteen.

The 2008 Summer Olympics, officially known as the Games of the 29th Olympiad, will be celebrated from August 8-August 24, 2008, with the opening ceremony at the Beijing National Stadium in Beijing.

The Olympic Games were awarded to Beijing after an exhaustive ballot of the International Olympic Committee  on July 13, 2001.

The Olympic Slogan, “One World, One Dream” calls upon the world to unite in the Olympic spirit. Athletes will compete in 302 events in 28 sports, just one event more than was on schedule of the Athens games of 2004.

The Chinese government has promoted the games to highlight China’s emergence on the world stage amidst concerns about environmental issues and human rights violations, particularly in Tibet. There have also been growing concerns of major nations boycotting the Olympics in protest of China’s actions in Tibet.

“Our celebrated athletes come from track and field, the few we have stand out. They stand out not just for performance but they stand out for a fact that I really credit them for and that is for not getting involved in doping,” Mr. Bridgewater said.

The National Olympic Committee (N.O.C.) will be joining the Co-Cathedral of Immaculate Conception Catholic Church on East Independence Square Street for a Church service on Sunday June 21 at 8:30am to invoke God’s blessing, according to Mr. Bridgewater.

Mr. Bridgewater also informed members of the press that there will be an Olympic run/walk starting at Basseterre High School Field, down Victoria Road, down Fort Street, up the Bay Road and ending at the stadium with one lap around the 400 m track. The Olympic run/walk will be from 3-4pm on Sunday 22.

Persons desirous of registering for the Olympic run/walk can call 465-6601.

“This will be good fun and it’s good for your health too,” Mr. Bridgewater said.

Mr. Osdel “Scottie” Hanley, public relations officer for the St. Kitts and Nevis Amateur Athletic Association  informed the press that it will cost $45,000 to host the weekend games. Mr. Hanley said that the games commence at 3 p.m. on Saturday and 4 p.m. on

Sunday. The gates will open at 1 p.m. on both days.