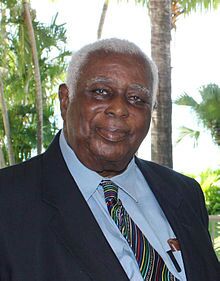 Basseterre, St. Kitts-For the second time this month, the federation of St Kitts and Nevis is mourning the loss of a former Head of State following the death of former Governor General Sir Cuthbert Sebastian.

The Observer understands that died Sebastian at his home on Cayon Street on Saturday evening at the age of 95.

He was a medical doctor by profession and was Chief Medical Officer of St. Kitts and Nevis from 1980 to 1983.