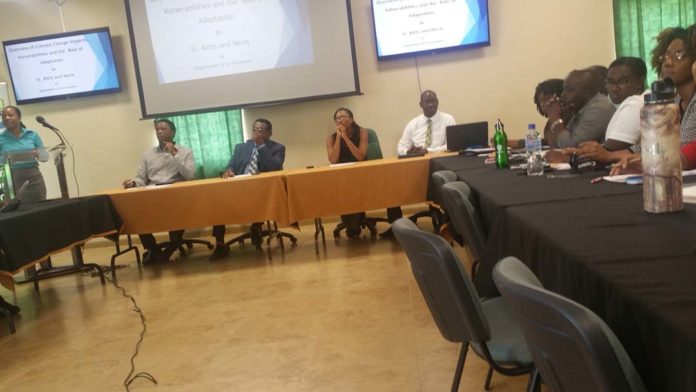 The impacts of Hurricanes Irma and Maria along with the growing certainties of climate change and rising sea levels makes a survival plan more urgent than ever for St. Kitts and Nevis according to Environment Minister the Hon. Eugene Hamilton.

Hamilton was speaking at a special consultation workshop Tuesday (Oct.3) attended by officials from various sectors such as Health, Tourism, Agriculture, and Environment among others as they aimed to give their input to ideas that will go before the Federal Cabinet.

He described the consultation as a timely occasion and indicated that greenhouse emissions in St. Kitts and Nevis were negligible in relation to global emissions.

“But the threats of climate change and sea level rises to small island states such as ours have been very real.”

He then referenced the ravages of two hurricanes Irma and Maria left on the Caribbean in the past month that left millions of dollars in damages and loss of life throughout the region.

“You would realise that sectors such as tourism, agriculture, water, finance and health have been impacted in some form or the other by these adverse impacts. Our very lives were and will continue to be under threat from storms such as these,” Hamilton said.

He continued, “In response it is important therefore that St. Kitts and Nevis undertake initiative that will reduce risk to humans and natural assets which comes from the change in climate of because of climate vulnerability.”

Hamilton added that to combat the impacts successfully it will require work from every sector and that important action needs to place to protect coastal areas, beaches and even infrastructure.

He noted that though the government’s response to climate change thus far has been slow it has been incrementally growing.

“The government’s approach to climate change has been relatively small but I consider it to be significant increments. A draft National Climate Change policy is currently at Cabinet for endorsement. The policy will guide the country’s pathway as it relates to addressing climate change.”

“This consultation is critically important as you identify key priorities and needs of your various sectors that will feed into the strategy. The views and inputs on the impacts, vulnerabilities and potential adaptation strategies related to climate change are required so that we can craft a strategy that addresses all levels and all sectors.”

Assisting is these efforts has been recent partnerships between the Federation and the Organisation of Eastern Caribbean States, the Global Climate Change Alliance Project, the Caribbean Natural Resource Institute.

Chief Conservation Officer at the Department of Physical Planning and Environment Sylvester Belle spoke of the department’s pleasure of partnering with these groups.

“This workshop focuses on Climate Change and establishing a strategy to mitigate the impacts caused by climate change.

“Most of us in some way would have witnessed the devastation caused by hurricane Irma, Maria and Jose to some extent Harvey in the United States,” Belle said.

Belle also highlighted the speeches given by Caribbean leaders at last week’s United Nation’s General Assembly with majority focusing on the impacts of climate change on the region.

St. Kitts and Nevis Minister of Foreign Affairs Hon. Mark Brantley was one of the speakers and called for a more sustainable planet, whereby action must be taken to protect the environment.

“In the space of two weeks we braced ourselves for three hurricanes, Irma, Jose and Maria. Two of these, Irma and Maria, descended on our region as Category 5 hurricanes, and in the case of Irma, the most powerful storm in recorded history in the Atlantic. I pause to reflect that the hurricane season for 2017 is not yet over and the Caribbean will face similar threats each and every year.”